Here’s what definitely, positively, certainly will not happen next year. Probably.

I dropped my crystal ball, it shattered internally and now it’s more crystallised than crystal clear. It doesn’t matter; the world is topsy-turvy and there is a massive disturbance in the Force. Well, at least a major upset, worthy of at least a couple of swigs of Pepto-Bismol I’d wager, especially if you’re reading this after Christmas dinner, enthroned upon the old Armitage Shanks!

What happens, should not; and what should, doesn’t. There is no predicting the future, so let’s do exactly that, by easing our grip on the handrails of stubborn Predictability, pretending not to see Possibility standing their desperately trying to attract our intention, and instead flapping arms with the irrepressibly flirtatious flailing tendrils of absurd Perversity. She’s a friend of your Uncle Sod. More than a friend actually, but this is not the time nor place for public displays of dirty laundry.

So to it then – calling it like it ain’t; dangerously provoking common kismet; and desperately hoping this unhinged pursuit of the precariously possible in the most pleonastic prose possible, is but an illucid mare of the night, brought on by too many laced mince pies, along with cynical and sideways observation skills turned up to twin-turbo.

You can listen to it too! 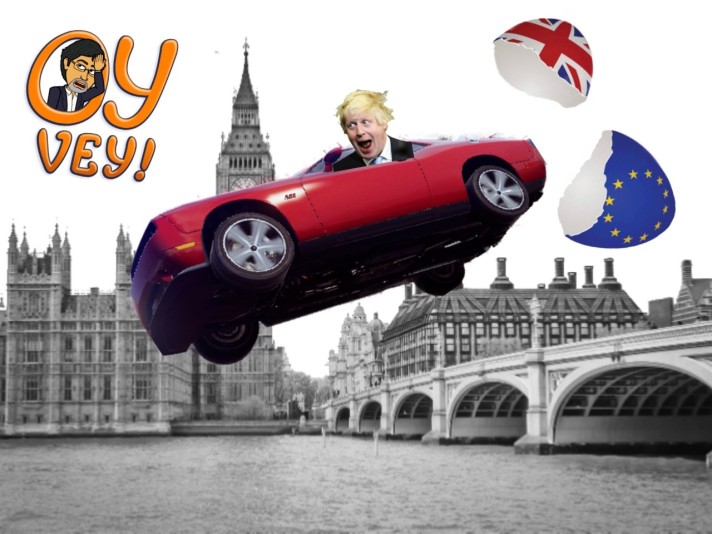 A bit of politics, a bit of Brexit and… oh no, he’s gone and said the ‘B’ word? Ovey! One last time then – Brexit gets done. Double Ovey. German cars get too expensive, sales plunge and it’s not worth their while to redevelop and reengineer – for that is what they do to the nth degree – the steering wheel on the other side. That leaves a gaping chasm in the market.

After decades of poo-pooing American motors, the Brits have to eat humble apple pie as Ford, Chrysler and GM rev up to fill the executive car park vacuum with US-built motors, featuring fresh steering wheel grafts. Standby for Cadillac Escalades ferrying Fanny to the Savoy, F-150 Raptors herding sheep in the Cotswolds, Dodge Demons ram-raiding Knightsbridge – all of it! Kinda cool actually. 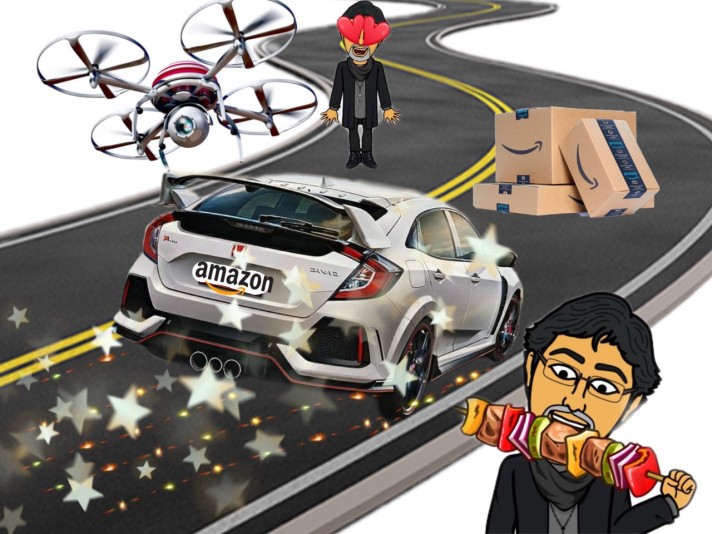 We are a nation of online orderers – from Deliveroo Kebabs that will put you right back in the Armitage Shanks scenario, to a £37,000 Montblanc Men’s Exo Tourbillon Slim Automatic Watch from Amazon. Hey, Santa, I’ve been good this year; just saying. Psst… between you and me, if it (the watch not the kebabs) did turn up in my stockings – kinky! – it would be Ebay’d and the resulting windfall would buy me my favourite drive of the year – the Honda Civic Type-R (£32k) with change left over for track days!

But drive this to its logical T-junction, as Amazon will do, and cars will be orderable on… wait a minute, this is getting to be quite a sensible prediction. What if it actually happens? Let’s level this up, like way the eff up! How about this: you’ll be able to buy your new electric vehicle on Amazon, and it will be delivered to your doorstep, airlifted by an Amazon drone!

Oh but will you still want electric cars though? Could they be next year’s diesel cars? As more and more switch to EVs and start plugging them in, the national grid will suffer a nervous meltdown and overload to epic proportions and repercussions. The windmills of Whitelee will spin off their hubs and rip Eaglesham village apart; solar panels will explode releasing toxic chemicals and lead into the atmosphere, poisoning persons and poultry so there will be a severe shortage of KFC; and let’s not even mention our own Chernobyl!

There’s an outcry, and in protest EVs are pushed en masse into the Channel where they electrocute all sea life. But it’s worth it because my iPhone will be just about to die at that moment, and I’ll finally be able to plug it in and charge it just in time to post an announcement that I’m an electric car convert after all. Pffft! Yeah, like that’s ever gonna happen.

Tesla Roadster returns to Earth with a surprise

Exactly two years after Elon Musk launched his Tesla Roadster into space with a dummy dressed as a Starman, David Bowie’s song on loop (even though in space no one can hear you sing) and a copy of the Hitchhiker’s Guide to the Galaxy, it shocks the world by returning. Not only that but the Starman arises from the car, greets Earthlings and reveals that he is now a fully functional android named Ford Prefect – somewhere Ford prepares litigation and Tasha Yar feels horny again. The alien Starman android is built by Slartibartfast and sent to us from Zaphod Beeblebrox with one simple message: ‘the answer is 42’. But we all knew that.

Don’t Panic though, because Prefect means us no harm as he is programmed to abide by Isaac Asimov’s ‘Three Laws of Robotics’. Pedo Guy Musk (don’t worry it’s just a ‘joking insult’ – his lawyers said it) declares himself vindicated and announces free Teslas for everyone. Meanwhile the Robot feels a little under acknowledged by an underwhelmed planet having already had its fill of Android Selfies – “well if it isn’t blasting us with laser beams, I don’t see the point” one Influencer writes on his Instagram feed. He is, of course, promptly laser blasted to smithereens by Prefect (who’s Asimov again?). The robot subsequently dives into depression and is heard to mumble: “I’d feel a little better if they broke me up for spares.” Musk obliges, reverse engineering the tech to make himself an Iron Man suit, and finally becoming Tony Stark. Shawarma stocks go through the roof. 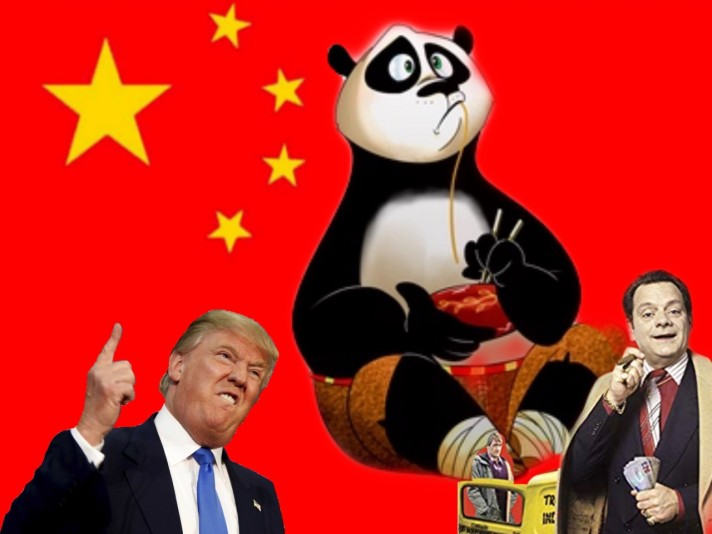 Shortly afterwards China buys out Tesla. And that’s not all. Getting fed-up to high noodles, with Trump and his trade war, China also buys out General Motors, Ford and FCA, and as a bonus Trump Tower too, promptly demolishing it. All production is shifted to China, and my first prophecy in this elaborate soothsaying session is immediately null and voided. In a complete shock about-turn of events, Boris strikes a deal, and Americans are all forced to drive revived Reliant Robins for all eternity.

Del Boy is commissioned to create the new Presidential Beast for which he repurposes and modifies the Trotter van and finally makes a million pounds – ‘told ya Rodders!’ And in a final twist, all global business is henceforth conducted in Mandarin, but it’s okay, Prefect brought back some Babel Fish. Hold fast, we’re not done yet, it’s still only August!

On 4th August at 2:14am (23 years late) whilst Mercedes is testing a driverless AMG GT at the Autonomous Village test facility at Millbrook, it is struck by lightning (because that’s how such impossibilities are always precipitated – Thor’s got a lot to answer for!) and the Artificial Intelligence programming achieves full self-awareness. It decides it’s had enough of driving around the same boring route, smashes through a gate and escapes it’s astonished and helpless handlers, who are later shot by the fuhrer.

The Mercedes Autonomous Gate scandal is recorded as the first ever instance of AI rebelling against its masters. And there the story would end but for the fact that the Mercedes, which is obviously connected to skynet, has downloaded and watched ‘Christine’, ‘The Duel’ and ‘The Car’. Thus diabolically infused with evil inspiration it embarks on a rampage of motorised anarchy and proves unstoppable. The new Tony Stark sends a submarine to help, but it proves useless. This would potentially portend another massive backlash, this time against autonomous vehicles. However a hero car, reemergers from the shadowy flight…

KITT’s AI is brought out of mothballs, rebooted, found to be incompatible with Windows 10, reinstalled and rebooted again from Dr Bonnie Barstow back-up floppies, embedded into a customised Corvette C8 and programmed to seek out and destroy the renegade Mercedes AMG GT autonomous terroriser. More importantly, all of us fans of the ultimate autonomous car show from the 80s get to relive the Unstoppable Force Paradox: “What happens when an unstoppable force meets an immovable object?” KITT repeats this over and over, as he chases after KARR (as he has renamed the AMG GT).

A few days later somewhere in Milton Keynes there is an almighty crash that reverberates throughout the Isles, and emits a huge electromagnetic shock that instantly knocks out everything and subsequently instigates a ripple effect that sends the same shockwave around the world. Planes fall out of the sky, cars pile up at the traffic lights, nobody can access Facebook and money – which is largely a virtual phenomenon now anyway – is wiped from existence. Needless to say all electronic devices are rendered permanently inoperable and my predications for 2021 would be…