This is the grooviest car review on the internet right now!

Kia call this car the Soul, and music has always been an integral theme with this model range – even in this latest third generation edition. You can see that from the acoustically-themed stylised interior design elements, and the fact that it’s got a banging 10-speaker Harmon/Kardon sound system. Whilst on the UK launch of the latest version, the most pertinent comment of the day came from my colleague, former-TV motoring journalist, Kevin Haggarthy: “I know why this car doesn’t have any engine noise, it’s so we can hear the music better!”

It was an epiphanic realisation. But how, you wonder, does it not have any engine noise? Is Kia able to deliver the sort of refinement that Rolls-Royce was once famed for (to paraphrase “the loudest noise in a Rolls-Royce is the clock” that was until that went silent too!). To be fair Kia refinement levels have improved dramatically over the recent years, but the real reason for the silent treatment is that there is no combustion engine up front. Henceforth, for some markets, including the UK, the Soul will only be offered only as an electric vehicle.

It’s actually the second Soul EV and the third full EV from the marque – the other being the E-Niro, from which the new Soul essentially takes its innards. Under the bonnet is a 64Kw motor putting out an equivalent of 201bhp and 395Nm of torque mated to a 1-speed (yes ONE speed) transmission. It weighs 1757kg with the batteries placed under the passenger cabin. It manages an impressive range of 280 miles (and up to 400 miles in city driving). It can be charged to 80% in 75 minutes and is said to be 30% more energy efficient than ‘Europe’s current best-selling EV’ – they wouldn’t name so put your guesses in the Comments below.

On the outside it retains the signature design and look now associated with the Kia Soul, albeit in a crisper, sharper more up-to-date form, whilst inside, as mentioned the styling is themed on the ‘visualisation of sound’ and as such, is finished with acoustic style shapes and textures. This is particularly apparent where the edges of the dashboard flow into the door panels with sound wave-like motifs. It remains practical too with  a 315-litre boot that expands to a cavernous 1339-litres with the seats folded down, and featuring rear underfloor storage for the charging cables et al.

There is ample room for a 6-footer to sit behind a 6-footer – any concerns that the batteries below might have robbed the cabin of room are instantly dismissed. There’s even a handy rear USB plug. It’s helped by being 80mm longer at 4.22m long and 30mm wider (1825mm).

Initially it will only be available in this ‘First Edition’ guise priced from £33,795 (claimed to be cheapest EV to offer this range) and will come with 17-inch alloy wheels, full LED lights, leather upholstery, heated front seats and steering wheel, adaptive cruise control, auto-dimming rear view mirror, 8-way power adjustable driver’s seat, heads-up display, wireless charger, reversing camera, forward collision avoidance and lane keep assist, as well as a driver attention monitor. Plus a 7-inch OLED instrument display and a 10.25 touch screen for the infotainment plus that great stereo with DAB and Apple CarPlay and Android Auto connectivity.

Upfront it’s self evident that Kia has put a remarkable amount of effort into the quality and style of the fascia and the instrumentation and there is no compromise in the comfort and seating position either. You can describe your surroundings as a pleasant surprise but the real shock is when you press the starter button (some musical chimes announce that it’s awake), select drive and floor the pedal for the first time.

Actually if you’ve just jumped out of the previous Soul, or indeed any Kia apart from the twin-turbo V6 Stinger – I’ll warn you now, whatever you do, DO NOT stomp on the accelerator. Because if you do, you’ll experience high-g acceleration of the sort Kia owners may not be generally accustomed too. Off the line this thing will even overcome the traction control systems and momentarily spin its wheels. If it grips it demonstrates a startling and almost unrelenting build up of momentum. 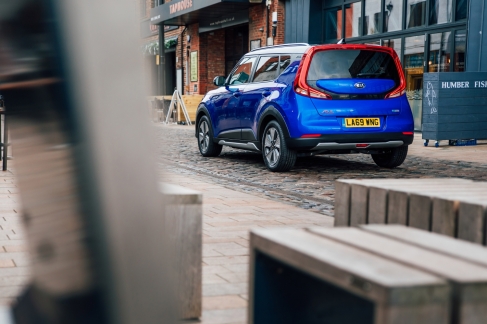 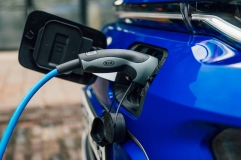 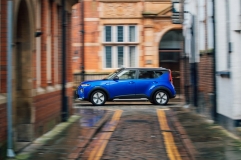 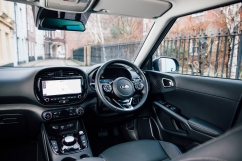 So Kia is lying. They are lying about the 0-62mph figure of 7.6 seconds, because this feels more like a five-second car – six at the most! I’m even left doubtful about that 104mph top speed, though perhaps the tall boxy shape holds it back. Having said that, like all electric drivetrains it’s clearly the initial pick up that’s astounding – perhaps in future we’ll be judging cars by 0-30mph times instead of 60mph – that would be more realistic in terms of city driving.

The next big shock is the first time you hit the brakes, they are very bitey, aided by the regen, especially if on the highest mode – setting three –  which can be controlled by the paddles on the steering wheel. Regen is where deceleration is used to create energy to recharge the battery. The two advantages of this is that around town if you drive it on this mode, you will significantly reduce the amount of actual braking you need, and reduce wear on your brake pads and discs; secondly you can increase your range which is why the range in the city can be as high as 400miles.

If all that wasn’t enough, there’s a third shock in store for you. This Soul EV employs fully independent multi-link rear suspension replacing the previous torsion beam axle, combine this with a lower centre of gravity due to the placement of the batteries, a wider track, tighter suspension and a sports mode that not only turns up throttle response but also sharpens the steering. Result? The new Soul is a remarkably poised, engaging and even entertaining drive. Around town it’s easy to place and manage, on the motorway it’s serene and stable and I’d wager you could frighten one or two hot hatches on quiet b-roads with the performance and road holding on offer. The ride is good too.

So there you go, Kia’s electric Soul not only makes a solid case for a reasonably usable EV, but also presents an enticing and desirable offering. Back then to the original question. Does it have soul? With the personality quotient turned up significantly on this charismatic Kia, I’d have to say, yes! 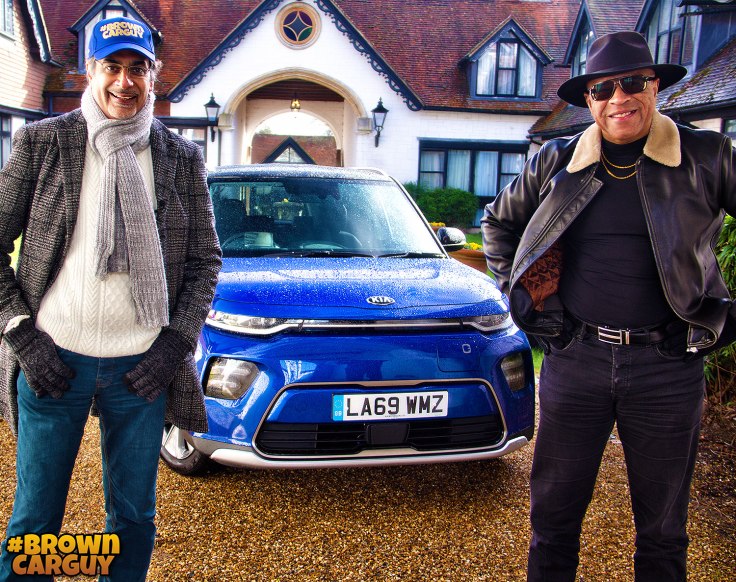