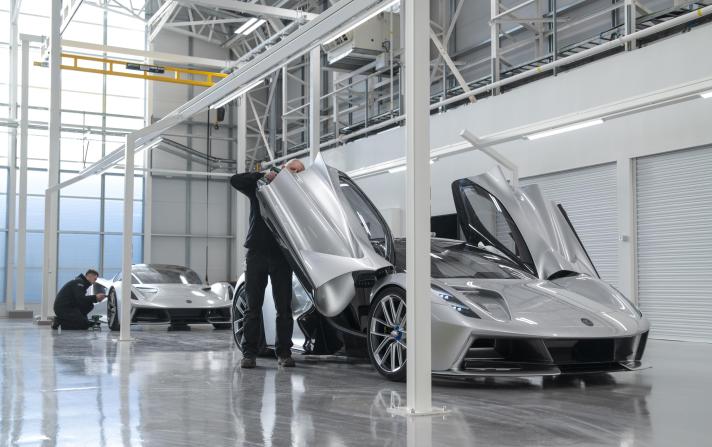 Lotus has released images and video of the new manufacturing facility where it will build the Evija full electric 2000bhp hypercar, which will soon being final prototype production, with customer deliveries expected in the summer.

With its name meaning ‘first in existence’ it’s the first British hypercar, the first fully electric Lotus, will do 0-62mph in under three seconds, 0-186mph in under 9 seconds, go over 200mph, has a 250 mile driving range and can be fully charged in under 10 minutes.

The new production facility is at the company’s long-standing HQ in Hethel, Norfolk, right next to its own 2.2 mile circuit. Lotus will hand build upto 130 examples of the Evija, with the first year production already sold.

Work on the new Evija factory began in summer 2019. The interior has been fitted on three sides with gantries which frame the build stations. These have been designed and engineered to be sleek and unobtrusive, though robust enough to carry the necessary power, data and compressed air systems required to assemble the Evija. 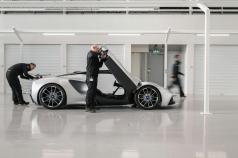 An overhead gantry crane, multiple vehicle lifts and a wheel alignment ramp have also been installed. The interior is illuminated by more than 30,000 of the latest high-density, low-energy LEDs. A state-of-the-art light tunnel will house the rigorous final inspection, before each Evija is driven out directly on to the famous Hethel test track for dynamic validation.

Phil Popham, CEO, Lotus Cars, commented: “This is now the newest car production facility in the world, and to witness it move from the drawing board to reality has been deeply satisfying. It’s testament to the commitment of all involved, and is the perfect sleek and high-tech production home for the Evija at our iconic Hethel headquarters.”