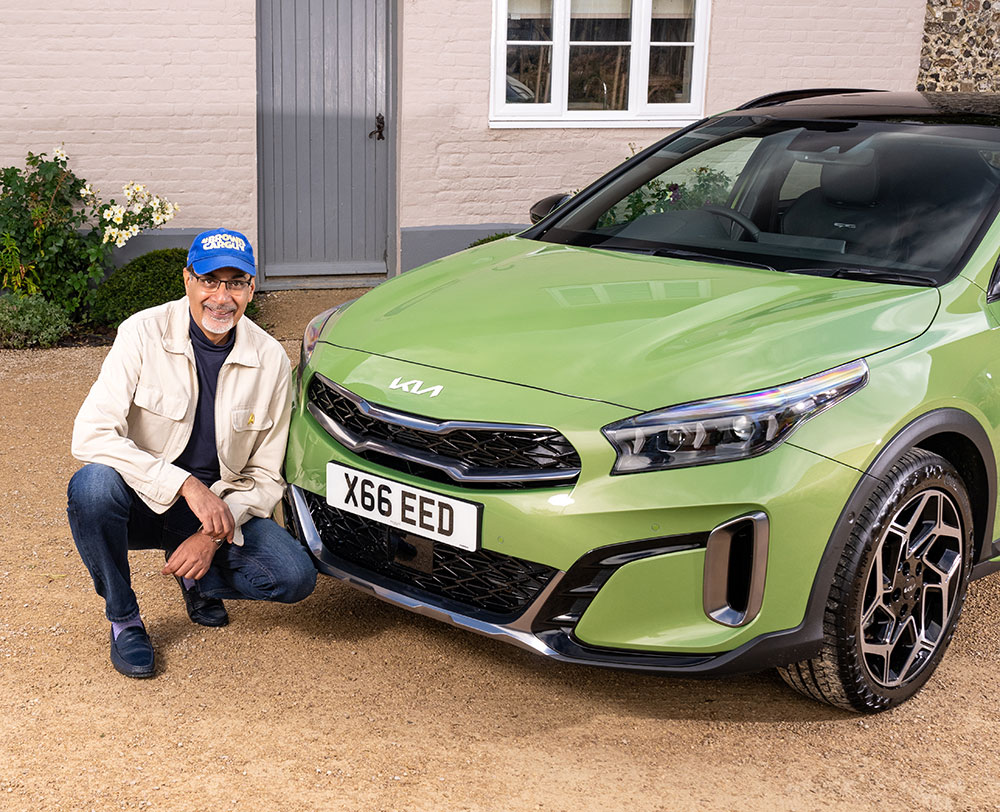 The Kia XCeed may be part of the Ceed lineup – think of it as the crossover, body-on-stilts version of the Ceed hatchback (though only the front door panels are shared), but it’s actually also the dominant force. It has lead sales not only in the Ceed/XCeed range since it was introduced in 2019, but has surged to take the third best-selling spot in the entire Kia UK portfolio, behind the Sportage and Niro. That’s almost 10% of the company’s sales.

For 2023 Slovakian-built XCeed for Europe gets some updates. It still retains the drivetrain previously offered including a Plug-In Hybrid model offering 36.6 miles of electric driving range, although predominantly popular with fleet sales (70% of sales). For the general consumers it’s the petrol model that appeals.

The new model year cars get new LED headlamps, revised grille and front bumper, new air intake design, and at the back a new diffuser, gloss back skid plate and again new taillights.

Inside the instrument panel has been tweaked with new touch-sensitive buttons. There’s also a new GT-Line and GT-Line S specification which get 10.25-inch touchscreen infotainment with a 12.3-inch digital instrument panel for main cluster on the GT-Line S. On and a panoramic sunroof.

There’s good standard spec including alloy wheels, and it remains a highly practical vehicle with good luggage space. There’s 426-litres expanding to 1378-litres with the seats folded, although that drops to 291 and 1243 respectively if you opt for the plug-in hybrid, as the underfloor space is taken over by the battery-pack.

The rear seating is comfortable, if a little tight for taller, long-legged passengers like yours truly. No such complaints in the front, where it’s easy to get comfortable, and the six-speed manual gearbox on the test cars entices.

It’s time to fire it up and put your foot down. And despite the very light and easy controls, there’s a roarty rasp from the engine, and an eagerness that suggests it’s a bit of goer, especially when the torque seems to get a second wind from just under 3000rpm.

You don’t mind sitting high, because the body composure of this otherwise tall-riding vehicle is rather grown-up. It doesn’t float or lean, and actually does a sterling job of soaking up the road surface and keeping things relatively calm in the cabin.

Visibility ahead is aided by the lofty seating and it’s easy to place the car as the extremities are relatively visible. Looking out the back is more difficult because of the smaller rear window and larger back pillars, although for parking, sensors and cameras adequately come to your aid.

Considering how eager the car is to press on, the steering does a good job of responding to your inputs but provides little feedback. And while the gearchange is well damped and satisfyingly smooth, it can be a little notchy and combined with a too-light clutch with an indistinct biting point. As such the manual transmission proves less enjoyable than you might anticipate. Although most buyers will probably opt for the automatic anyway.

Having said that, the key to the Kia’s appeal is not its sportiness, because few will be driven hard. Where it excels is being practical, likeable, easy to drive and live with, and relatively spacious and comfortable (the proviso for the latter being in reference to ‘normal’ sized adults). It handles well, even when thrown about on some sweet curves, has a highly competent ride, and the styling is sufficiently contemporary and compelling that you might even look back at it every now and then when walking away, especially if you get it in green. Which you must!

If you enjoyed this content, please buy me a coffee! https://ko-fi.com/browncarguy

🗞 My latest Motoring Section for Asian Leader Newspaper (distributed in Manchester) - out today - SPECIAL ANNUAL FEATURE!! Pick up a copy if you can! 💻 or read online at AsianLeader.co.uk or https://online.fliphtml5.com/vxbbt/phvk/#p=20 🚗
Month of January 2023 😃 👍🏽
‘Creativity is in all of us’
Happy Birthday Son! @junji4real