The Right Stuff – Ford Mustang in the UAE

In the 55th year of Mustang, I’m reminded of a feature I did on the 50th anniversary 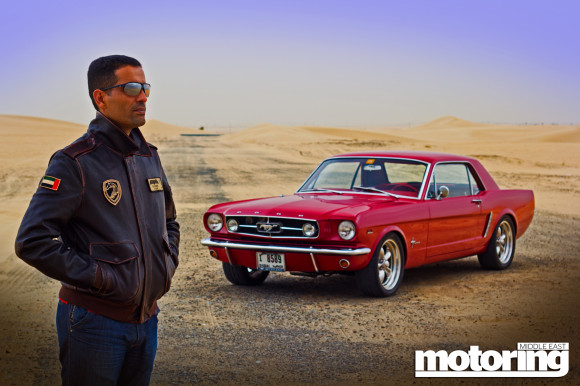 This year marks the 55th anniversary of the Ford Mustang, and I’m reminded of a feature I did for Motoring Middle East on the 50th anniversary – featuring an 1965 Ford Mustang owned by the lead pilot of the UAE aerobatic team! The full version was published on 27 April 2014:

It’s somehow just so fitting that the man who owns the car you see in these pictures – which of course is quite simply one of the coolest cars on the planet, a 1965 Ford Mustang – also has one of the coolest jobs on… well actually slightly above the planet! Meet Lieutenant Colonel Nass Ahmed, fighter pilot and currently Team Leader of Al Fursan, the UAE National Aerobatics team.

He bought this red first generation Mustang back in 2007, after hunting for it online and sourcing it in America. He asked a friend over there to go and check out for him, and once he got the thumbs-up imported the car over to the UAE.

Why an original notchback Mustang? Because he previously had one, and ran it as his daily driver, whilst he was studying in the States in the early 2000s. Once he got back to the Emirates he missed his old Pony car so much he decided he simply had to have another.

Though much-cherished and a car which he is constantly improving and restoring, treating it to exterior and interior refurbishments at least once a year, this isn’t a precious trailer-queen show car, it’s a classic muscle car that sees regular use, particularly in the winter months as Nass can be seen driving it to and from the airbase where Al Fursan is based.

And this of course is how it should be, because the Mustang was never meant to be a rare and exclusive weekend-ride, it was a car designed and developed to be practical and functional as a daily driver, and yet still do you proud at unofficial drag races. And it was a hit from the word go, becoming one of the fastest selling cars in history with over a million sold within 18 months of its launch – 418,000 in the first year alone!

Launched in March 1964, the earliest cars became known unofficially as 1964½ model year cars, as it was several months ahead of the normal start for 1965 Model Year production – but all the early cars were marketed by Ford as 1965 models.

Ford General Manager, Lee Iacocca, initiated the project for an all-new ‘compact coupe’ designed to appeal to younger, or young-at-heart, drivers. He and his team managed to do even better than that with the Mustang. This is the ultimate zeitgeist car, perfectly capturing the optimistic, bold and adventurous spirit of the 1960s, and proving an instant hit across generations and classes – similar to how the Mini captured everyone’s imagination in the UK around the same time – with an enduring appeal that remains as strong as ever today.

The long-nose, short rear deck styling proved extraordinarily popular and became a much-copied template for cars of this ilk. David Ash and John Oros, are generally credited with the design, though it was derived from an earlier concept by a team comprising Bob Maguire, Philip T Clark, John Najjar, Jim Darden and Ray Smith who produced the Mustang 1 Prototype which was actually a two-seat mid-engined roadster! Think Speed Racer. It was deemed too extreme.

Ash and Oros came up with the four-seater coupe in an internal competition based on Iacocca’s five goals: four bucket seats; floor-mounted shifter; weighing no more than 1100kg, shorter than 180inches (4572mm); and starting from less than $2500.

As such it heavily employing Ford Falcon and Fairlane components, though the body shell was unique with a shorter wheelbase, wider track and the car was lower. Despite its humble origins, it did boast an industry first: the ‘torque box’ described a structural system that made the car more rigid.

The production Mustang was officially introduced at the 1964 New York World Fair, and people immediately went wild for it. The first cars were auctioned off, with at least one buyer so anxious to take home the new Mustang, that he slept in it overnight until his cheque cleared the next morning so that no one else would buy it in the meantime. Such was the fervour the new Ford inspired.

Then, as in more recent times, the Mustang caught Ford’s rivals napping and launched what became known as a The Pony Car Wars. Stunned by the Mustang’s runaway success, Chrysler introduced the Plymouth Barracuda which admittedly became one of the most revered muscle cars ever, and GM gambled on victory with the rear-engined Corvair Monza, which failed due to campaigning by consumer rights activist, Ralph Nader. It was only when the Chevrolet Camaro and Pontiac Firebird came along a bit later than things hotted up.

It was launched in coupe and convertible guises with a Fastback following the next year, and its styling saw copycat cars such as the Toyota Celica and even one from its own stable – the Ford Capri in Europe. The base model featured a 170cu (2.8-litre) straight six with a three-speed manual transmission and retailed for $2368.

Of course there was also a large range of V8 motors on offer that ranged in power from 195bhp to 390bhp. As well as the three or four-speed manuals, there were three-speed automatics and you could opt for sports handling packages, front disc brakes and multiple trim options.

The first generation ran till 1966 – for 1967-68 there were design changes, and the 69-70 car was actually bigger – there were changes and updates throughout its production. The Mustang GT for example, arrived in 1965, with a 225bhp 289 V8, grille-mounted front foglamps, rocker panel stripes and disc brakes. Inside the 1965 cars got round dials for the instrument panels instead of the rectangular version you see in Nass Ahmed’s car.

The fastback version also heralded the arrival of the legendary Shelby Mustang, as a GT350 specs with 306bhp from the 289 motor with four-speed manuals and heavier duty Ford Galaxie rear axles, plus of course, Cobra badging.

For 1966 the Mustang got some trim changes including a tweaked grille and wheel covers and a new petrol filler cover. The grille now had a slotted style whilst the earlier car had a honeycomb version.

Once you’re smitten, of course, you need to have one, as Nass found. As far as he’s concerned it’s a keeper too, his personal pride and joy, a true genuine exotic in a sea of insipid modern supercars that line the streets of Dubai.

Nass has been very sensitive with his 1965 Mustang. Despite a kicking sound system, visually there’s little evidence of a modern audio system, and his modifications extend only to swapping the engine for a more modern 347 Stroker with 450bhp, plus of course an air conditioning unit to make the car usable in the UAE climate. Although he is toying with the idea of swapping out the auto for a manual transmission.

Other than that he plans to do little to it other than give the interior a bit of a refresh and perhaps a new coat of paint next year. The car was the feel of a real-world motor that gets used, and that’s the way he, and we, like it. 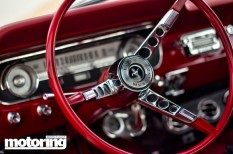 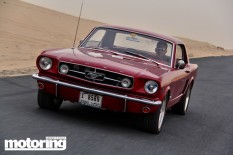 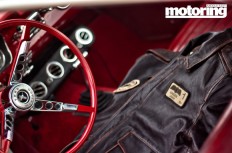 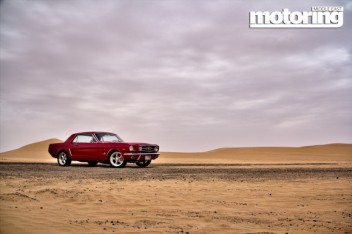 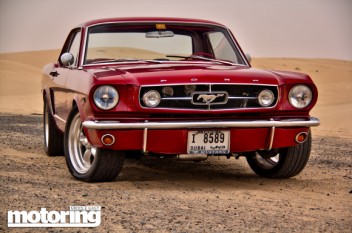 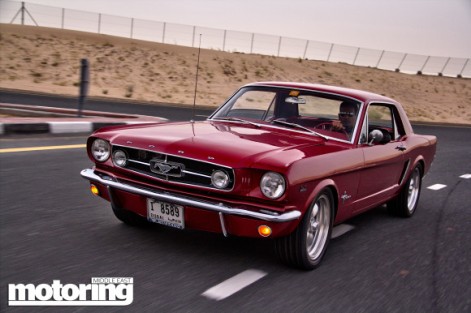 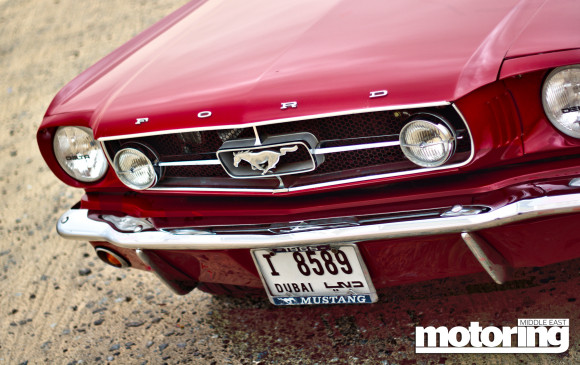