10 Cool Convertibles for under £2k

Topless fun in the sun for a couple of grand? Oh yes, it’s possible! 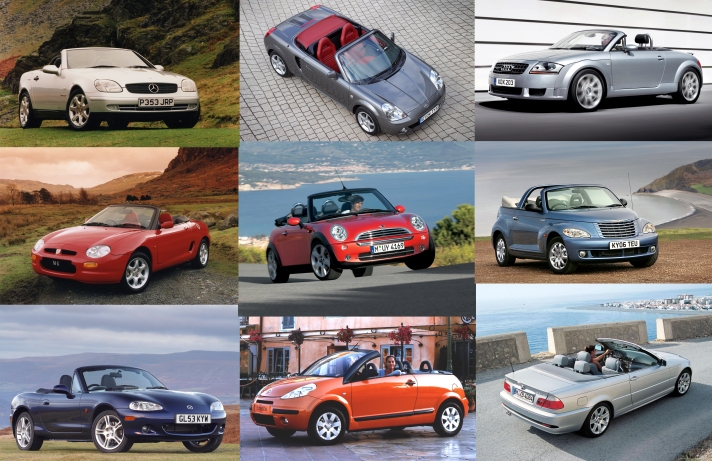 Summer is coming and you’re thinking it would be pretty dope to roll around in a roadster, look cool in a convertible, revel in a ragtop and cruise to calypso in a cabriolet!

But what if the great British Summer isn’t, well, as great as it was last year? What if the freaky weather serves up a cold and wet summer of discontent instead? What if the Drizabone goes back on and the winter woolies become the summer accessories? You don’t want to invest a heap in a sexy top-down motor if that happens.

Well you don’t have to. There’s plenty of great propositions for suntan-soiled wind-in-the-hair motoring available for under £2000. Oh yes indeed! And here’s a few astonishing examples that caught my eye.

What would you get? 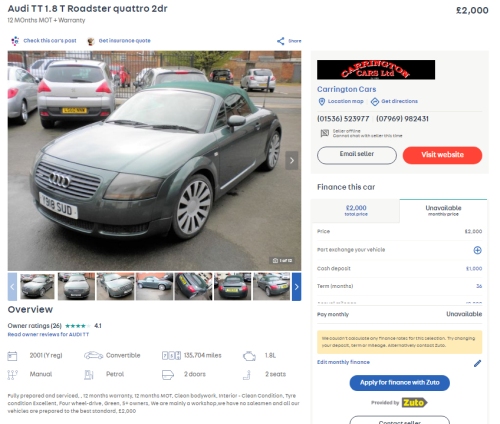 Get past the boring hairdresser clichés and I maintain that the first Audi TT was the best looking and most standout version. It still looks modern today. This one might have high miles but comes with a 12 month warranty and MoT. And if the weather does turn bad – it has All-Wheel-Drive! 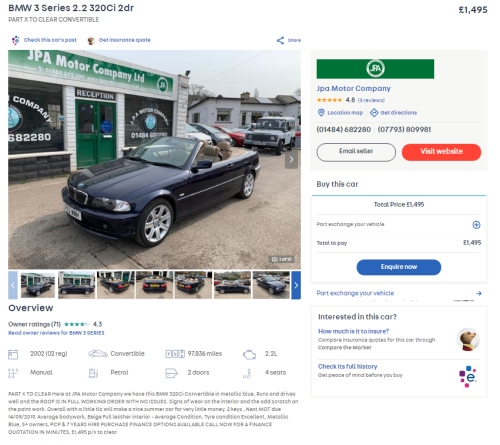 Statistically proven to be a babe-magnet… well it would be if there were any such stats! Nothing says convertible cool more like a 3-Series convertible and it’s proper driving fun. For less than £1500 you could be beaming from a Beemer.

From its chrome wheels to its faux 40s roadster looks, the PT Cruiser was always cool, you just didn’t realise it. Future classic status may well beckon, but so does family fun – how many other soft tops provide as much space and practicality as this? I’d consider it, especially this manual version. 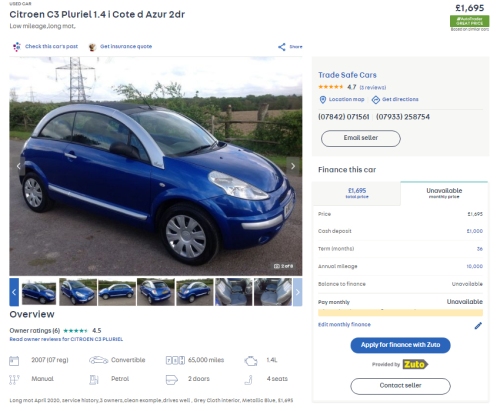 Kinda like a modern-day 2CV, the C3 Pluriel is a sort of eye-popping city car with a sunroof that opens so far back, it becomes a convertible. Last of the quirky Citroens perhaps.

Now of course there had to be an MX-5 on this list. It’s just astonishing that this modern classic can be had for under grand. And that too in Mk II guise. This one comes with full history and a three-month warranty, but flat cap and driving gloves are sold separately.

A Mercedes roadster at this money? Oh Lord won’t you buy it for me? And the Lord said: ‘buy it yourself you cheapskate – it’s less than 1400 quid!’ Solidity and class assured.

A relatively modern day MG that actually echoes the golden era of MG when it was all about fun-to-drive British roadsters. Good ones of these will start to go up in value as they attain classic status.

Arguably the early reborn Minis were the most fun and engaging to drive, though BMW has made them safer, more robust and reliable since then. A perky personality that can’t be denied and dropping the roof ups the laugh-out-loud quotient.

There is just something so sophisticated, arty and maverick about choosing to drive a Saab, and then you add a dose of extroversion to the formula when you get a stylish soft-top. Drive this you’re a tangent thinker, an insightful orator, focussed to a fault, and you have a wardrobe full of black roll necks.

And finally one of my favourite Toyotas. If the first gen MR2  thought it was a Fiat X1/9, the second a Ferrari, this final version was convinced it was a Japanese Porsche Boxster. But whereas you couldn’t buy a Boxster because everyone thought you’re weren’t good enough to handle a 911, you could get this. You can drop and raise the manual roof from the driver’s seat and it’s a truly visceral drive.

DISCLAIMER: As ever, all the usual used car buying rules apply. I have not inspected any of these cars and am not endorsing these actually examples. They are cars I’d consider but would check out carefully. And with old convertibles always check for leaky roofs and water ingress that could damage interior trim and components, and cause rust in some cases. Though if you run it through the summer and the weather’s epic, nothing else will really matter.