Can car attacks be prevented?

Is there a way to stop vehicles being used to attack innocents in terrorist attacks? 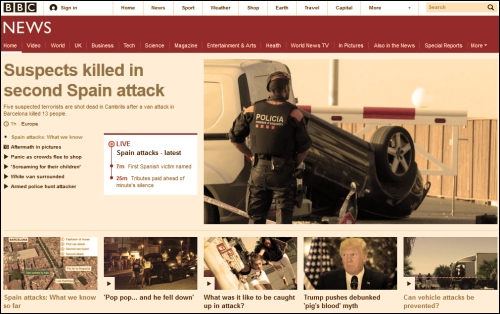 I firmly believe that guns have no place in civilised society. Guns should be comprehensively banned – I can see absolutely no reason whatsoever for ordinary people to own and carry guns. Only those in official authority, after a lot of training and mental evaluation, should possibly be considered to be allowed to carry arms.

Gun proponents will argue: ‘It’s not guns that kill people, it’s people that kill people.’ And frankly they’re not wrong. But I still believe the solution to preventing innocents being shot and killed is a blanket ban on guns.

But then that does leave me in an extremely uncomfortable quandary when it comes to the thing I love most – cars.

Because as we have seen through a series of terrible vehicle attacks since last summer culminating most recently in the horrible events in Spain and just a few days earlier, a murder in America, vehicles – cars, vans and trucks – can also be used as lethal weapons.

And again, you and I would say that it’s not that car doing the killing, but the drivers. However unlike guns, that act of maiming or fatally injuring a person is nowhere in the remit of a car’s purpose whatsoever, which it can be said that’s the sole purpose of a firearm.

But as has been tragically demonstrated, a car, van or truck can, has and probably sadly will continue to be used to kill people.

Anti-terrorist specialists are stumped by this methodology of killing, because how can you monitor people using their own car, or renting or stealing vehicles to use in this manner? And then how can you stop actual motor vehicles from ploughing into crowds of people?

You could put up barriers – as they have done on Westminster Bridge in London – on every single pavement, but that’s prohibitively costly and unfeasible especially as terrorists will just choose a softer more accessible target.

Technology is the answer. Specifically the sort of drivers’ aids and autonomous drive systems that are already starting to be fitted to modern cars. Yes, the exact systems that, as an enthusiast driver, I personally hate.

However, if people cannot be trained to drive properly, or trusted to use the vehicle responsibly, or identified as potential terrorists behind the wheel, then this is a solution that can’t be ignored.

It is already possible to have auto-braking systems in cars – which could permanently be enabled so that the car will simply apply the brakes as soon as it detects an obstacle of any kind.

Even if you forced a vehicle to hit something through sheer momentum, it would still have slowed the vehicle considerably before the point of impact.

Disable the safety devices? The cars can equip with fail safes and systems that completely immobilise a car if the sensors or safety systems are tampered with.

The anti-collision tech could be combined with GPS geo-positioning, which would identify pedestrian and congested areas and automatically prevent the car from higher speeds and from veering onto non-road traffic areas.

And then there’s full autonomous drive, which will completely take away the act of driving from a human altogether. Admitted this technology is still a few years from being perfected, despite the claims of Tesla and co, but it is coming. So how soon after will there be legislation to ban driving completely? Not long I fear.

Of course all of this means potentially the end of the activity that me and my kind love the most, the sheer act and enjoyment of driving, actually being in control of a good car. Unfortunately as the world gets madder, this might be the price we have to pay to protect our communities, our families and our children.

I absolutely adore cars and driving, but I abhor more than anything the killing and maiming of innocents.

What’s your favourite Halloween ride?
Everything you need to know about the new 2022 Range Rover!
About 10 days ago I was picked up by a Roll-Royce Cullinan to be taken to a secret evening event - find out what that was all about tomorrow! 😉🤷🏽‍♂️☺️🤦🏽‍♂️🤣
🗞 My latest Motoring Section for Asian Leader Newspaper (distributed in Manchester) - out today. Pick up a copy if you can! 💻 or read online at AsianLeader.co.uk or https://online.fliphtml5.com/vxbbt/scdk/#p=20 🚗
LATEST VIDEO UPLOADED!! 📹😃
Double whammy of costs hit London motorists’ pockets hard. Watch my two vids on my YT channel now!
Absolutely loved this comic strip by @the__back__lot so couldn't resist having a play and trying to animate it. Hope you enjoy this!
See my full Kia EV6 review now at BrownCarGuy.com 👉🏽 link in bio 👈🏽
Check out my chat with good buddy Mathias Doutreleau who is Founder and Chairman of the Concours d’Elegance Suisse and has created automotive events around the world including the Middle East, Far East and The Quail in California.
Thank you for the great feedback @shetalkscars 🙏🏽☺️
Can you name the car? 🤔
WATCH FULL VIDEO NOW! 😃
LATEST VIDEO UPLOADED!! 📹
Sometimes stuff like this happens… 😲🤷🏽‍♂️☺️🤦🏽‍♂️🤣
Driverless cars ain’t happening anytime soon - here’s why! 😲 See my latest feature in @thenationalnews.com
Thanks to @muhammadhajihhc Muhammad Ali Haji of @behindthewheel.life - my latest @patreon supporter. Join him at Patreon.com/BrownCarGuy
So great to catch up with good buddy @suhaibshashaa of @arabgt_ in London recently! 😃 These guys are the superstars of the Middle East automotive scene 💯
WATCH FULL VIDEO NOW! 😃
LATEST VIDEO NOW LIVE!! 📹
@junji4real sent me these pics of a wicked winking ‘Interceptor’ - actually a second generation (A60) Toyota Supra like the one I used to own (and dearly miss) but interestingly modified in this case. Would love to know what’s happening with those high mounted rear tailpipes 😲