The Aliens have found us. And they don’t seem entirely friendly.

‘They’re planning vacations here for goodness sakes!’ the senator furiously stabbed at a printout on the table in front of him, and shouted across the crowded room at the most formidable presence inhabiting it. The leader sat at the head of the conference table and quietly studied the agitated and anxious debate.

‘And there’s one tiny problem with this picture – I don’t see us in it! It’s very clear what that means.’

‘Now, now, just hold on a minute,’ spoke up another. ‘We don’t know that they are even aware of our presence here…’ She was cut off by the first, who held up the printout pointing at.

‘They know enough to have pictures of our planets!’ 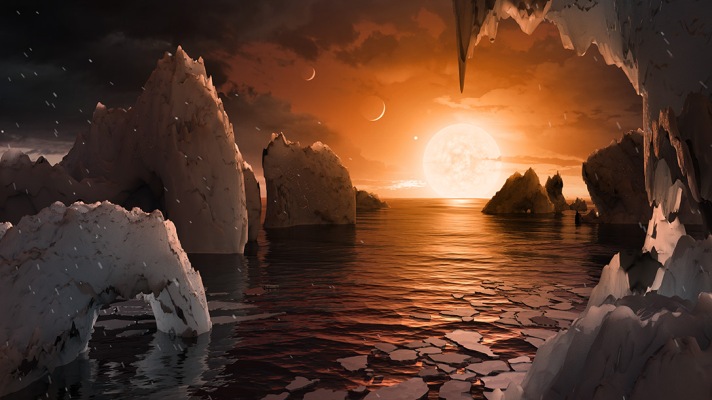 Finally the individual at the head of the table raised his hands gesturing for silence and turned to a person on his left.

‘Worst case scenario?’ He asked, the concern and anxiety clear in his voice.

The General cleared her throat and worked a pad to bring up a holographic display in the centre of the table.

‘We have limited recon information sir, but we do know they have short-range space flight capability and nuclear weapons.’

The display morphed and swivelled to illustrate her words then paused.

‘The Professor may be right though, all our intercepts of their transmissions and broadcasts indicate only speculative claims of life in our – what is to them ‘newly discovered’ – planetary system. On the other hand, they may be bluffing their populace.’

Another senator spoke up at this point: ‘A government that hides information and lies to its people? What kind of civilisation is that?’

At this point the General pulled up news footage video imagery of war, violence and human rights violations that her team had intercepted.

‘Quite a barbaric and violent civilisation I’m afraid to report, and according to these intercepts, lying is the least of it.’ The career soldier was visibly shocked and the room fell silent for a moment contemplating the horrific images.

The leader finally swiped away the display and spoke, filling the room once again with hope as was his way.

‘Nonetheless, they are an advanced civilisation. Perhaps we should initiate contact with them? Maybe we could reason with them. Who knows, they might be willing to cooperate with us?

‘Who is the leader?’

At this point another expert in extraterrestrial anthropology took over: ‘There’s no one government as such, though from what we know these are the two most powerful men in leadership on the planet.’

A holographic image appeared of a pale hairless human and another oddly-hued individual with rather too much hair by contrast.

The expert started running through the personality profiles and career histories of each. As he did so, the disquiet and dismay in the room grew to palpable levels.

At the end of the presentation the senator who spoke first, again took the floor, in a more subdued and measured manner, but still full of firm conviction:

‘These are a people that have barely been able to understand their own kind, or appreciate their planet, and appear comprehensively unable to peacefully coexist with each other. All prior evidence suggests that when faced with the unknown or unfamiliar, their first reactions appear to be destructive in nature.’

He sensed he had the room and pressed on: ‘They are technologically only a little behind us, and now they very likely know that we are here. To them we are aliens. To them we are the unknown and unfamiliar. I’m not as smart as the professor, but I think their response to us will be obvious.’

The leader sighed and heavily turned once again to his General. She understood immediately what he would ask next.

The General was hesitant but professional in her response, she’d already prepared for this scenario.

‘As you know all our quantum missiles were mothballed two centuries ago, but our technicians believe we can restore the required number to operation within a week. We would only need about a dozen. Delivery would be via our autonomous warp probes – about two weeks…’

There was a longer pause before the general replied as she looked around the room and fixed on the gazed of each individual so that there would be no doubts as to the implication of her next words.

‘Total annihilation. With no opportunity for them to initiate any kind of retaliatory strike.

‘We would be responsible for the death of 7.5 billion sentient living beings and the extermination of an entire species.’

The leader sighed. When he spoke, he addressed not only those in the room, but an audience numbering over 43 billion, over three planets and multiple satellite habitats, which had been witness to all the discussion that had taken place thus far.

‘As your leader and your representative I abide by your wishes. The decision on what action we take, or not, is entirely yours. You must now cast your vote on whether we commit a pre-emptive strike against these beings.

‘Do not take this lightly. Our kind has not faced such a question in the lifetimes of all of you, or your parents. We have evolved into people of peace. Yet here we stand at a unique juncture in our long and extraordinary history, where fate appears to be luring us to regression. You are empowered right now, with the grave opportunity to commit mass genocide.

‘And faced with the threat of such brutality from this species it may be too tempting to go down the road to oblivion. I choose those words because for generations to come, an innocence will be lost amongst us, and we will have to bear the heavy burden of blood that will saturate our very souls.

‘On the other hand, if we do not take action now, we may soon find ourselves directly encountering a dangerous, belligerent and unpredictable people, as evidenced by their present leaders – men short of sight, quick of temper and devoid of compassion.

‘It is difficult to say if there would be opportunity for reasoned discussion with such people. We could initiate contact ourselves, but that immediately exposes us to them. We would then be at the mercy of fate as to whether they listen with open minds, or respond impulsively with closed ones.

‘Still, fate has indeed been our friend in the recent past. We have sacrificed much for the peaceful societies we have now created, be aware of this before we cross this threshold of terror. Though let’s not forget that our priority is to preserve the lives and welfare of our own citizens.

‘Yet I implore you, we must be clear in our conscience about our next action. I await your decision.’ 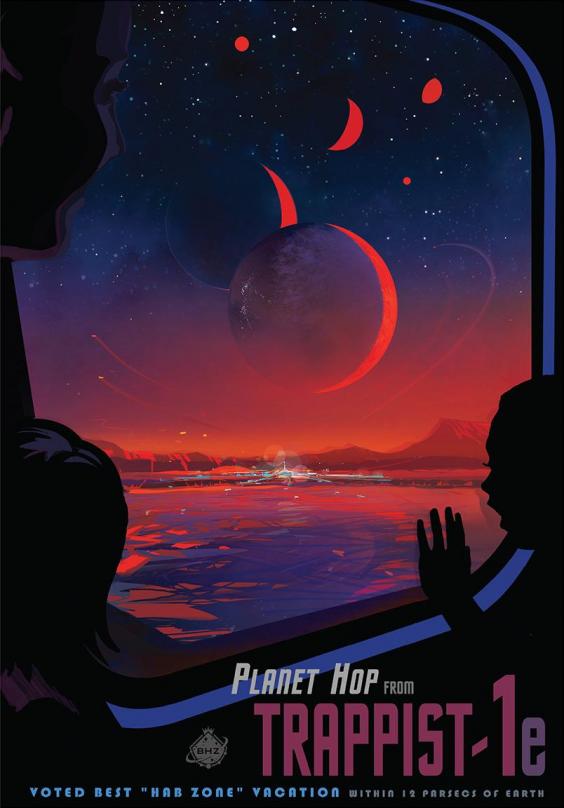 The leader turned his face down to examine the printout again.

‘Trappist-1e’ – what a weird name for the beautiful red ball of flame that was their life-giving Evar, he thought. Still they had almost perfectly reproduced the glorious silhouette vistas of the planetary systems in the setting of the red sun. The pictures as indeed eerily accurate.

The image also depicted what appeared to be humans glancing out through a window, staring in fright at an alien city. An older alien appeared to be grinning, perhaps at the impending destruction of the city.

It made for a frightening prospect. Unless, somehow… But now it was in the hands of the people.

He looked up, just at the instant voting results were compiled and beamed up on the holographic display.

Then he turned to face the general…