The Measurement of Nonsense

Can you really just make up a whole new measurement – like Nissan has with Desert Camel Power?

Behold! You lot are in for a very special treat. Remember this moment, for in years to come, your children and grandchildren will ask you – do you remember when SPH was created?

The what?! What the heck is SPH?

Oh, get this, this is brilliant. You know how I know that? Because I just came up with it!

It stands for Shazzies Per Hour. Okay, it was originally going to be called Ideas Per Hour, but I wanted to own this. And it is, as you’ve rightly surmised by now, a measurement of ideas!

Yep, you see I’m constantly coming up with ideas, but sometimes the inspiration flows like flood waters through a busted damn, whilst other times it’s like a drought and ideas barely drip into cohesion.

But I reckon anywhere between 3-10 SPH is doing alright. 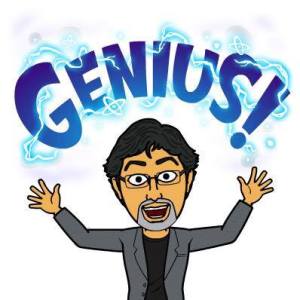 How do you actually measure an idea itself? How can you say you’ve really had an ‘idea’ for sure. Believe it or not, way smarter people than me have tried.

German polymath and philosopher, Gottfried Leibniz (1646 – 1716) tried to discover the calculus that could map every single idea into numbers. However, nobody, Leibniz included, has really been able to do so.

Yes – it’s cliché time here, because trying to ‘measure’ an idea is exactly like saying ‘how long is a piece of string?’

Figuring out that picking up the laundry whilst out getting the groceries, because it’s on the way, and will maximise efficiency, is an ‘idea’. Suddenly being hit by the inspiration that will allow you to come up with the method of faster-than-light travel, is also an ‘idea’.

One is mundane and trivial, the other would change the course of history for humanity itself. And yet they’d measure about the same.

Let’s define this thing first: ‘a unit of measurement is a standardised quantity of a physical property, used as a factor to express occurring quantities of that property.’

Basically it’s a finite thing you can put a number too.

And in order to do that you’ve got to use one or more of seven base dimensions according to the International System of Units (Si) from which all other units can be derived.

These are the metre for measurement of length, the kilogram for mass, the second for time, the ampere for electric current, the kelvin for temperature, the candela for luminous intensity, and the mole for amount of substance.

Which would amount to a can of beans and 5mm of squirming about in your chair for 20 seconds as you coped with being a little gassy. Hence I conclude: it’s all a load of hot air!

Which segues nicely into this: Nissan Middle East has just issued a press release claiming that it has created an entirely new unit of measurement – Desert Camel Power – in order to measure desert performance of a vehicle.

First of all camels are not cars, though Nissan is clearly taking inspiration from the concept of Horsepower. 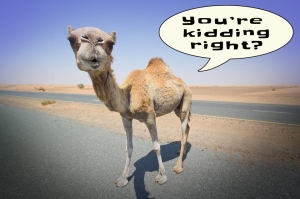 Nissan claims that DCP uses ‘a scientifically proven formula to determine, in an accurately measurable and reproducible way, how a given vehicle will perform in typical desert off-road conditions.’

According to Engineer Joseph Rachid El Hachem, Desert Camel Power Unit Engineer (yep, that’s his title): ‘Basically, we found that it comes down to the interplay between the vehicle’s weight, its velocity and its trajectory.’

And the formula they’ve come up with is this: 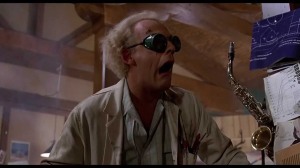 Which I find quite amusing, because since Nissan Patrols are quite heavy vehicles, the formula appears to ensure that they will score highly even if they don’t go that quickly (which they won’t if fitted with the lethargic new V6), because the mass is used as a multiplier!

Admittedly my information regarding this radical, literally Earth-shattering new unit of measurement is limited to what I can glean from the press release as I was not invited to the press briefing and live demonstrations of DCP in action.

Now my maths ability is limited to being able to open the calculator app on my iPhone. So would all the mathematicians out there – and by that I mean anyone with more numerical comprehension than me, and by that I mean probably ALL of you – correct me if I’m wrong, but as I understand it, ‘sin’ is the length of the hypotenuse, which essentially makes it an indicator of the angle of approach, right? 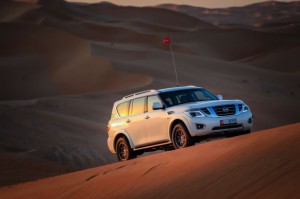 And there are more compelling problems with this form of measure as highlighted by El Hachem himself:

‘Other factors including manoeuvrability, engine torque and of course the skill of the driver do come into play and cannot be discounted. However, if we standardise a vehicle’s approach speed and trajectory in a given environment we can time how quickly it travels a set distance and subsequently factor in its weight to work out its Desert Camel Power.’

In fact, from my understanding of off-roading the torque characteristic of a vehicle – not just the amount, but the manner and rev-band in which it is delivered – is one of the key factors in not only how good a vehicle might be off-road but what kind of terrain it would be suited to. And yet torque is not accounted for in the formula.

Agility and driver ability (which is quite possibly THE most vital aspect of all) are cited as important to off-roading by El Hachem, but one of the biggest factors is, as also mentioned, almost in passing, is the ‘given environment’.

And this is a big deal, because unlike consistent tarmac where for example most vehicle reference figures are established within a reasonable margin (0-100 and top speed etc), off-road terrains are utterly unique and never even quite the same – even in the same spot!

From mud to rock to sand, and then the grain and softness of the sand itself, all of these aspects will throw off any calculation of off-roading ability in an instant. Even if you were to use the basic concept of an uphill sand-drag as a standardised measurement of all off-road cars, you’d have to find a dune that remained exactly the same height and angle all year. That’s simply not possible.

Caught up in its own reverie, Nissan Middle East is of course taking the whole thing seriously – yes I did check the date and it’s still a whole month to 1st April so it can’t be that! – and has presented its findings to ESMA (Emirates Authority for Standardisation and Metrology) and will use DCP in highlighting Nissan vehicles’ off-road ability in marketing and showroom info.

Well you’ve got to applaud the attempt and, even from the point of view us journalists, it would be nice to have some way to quantify a car’s off-road ability, particularly in sand which can be so treacherous.

However the concept they’ve come up with, can relate to little more than the annual Moreeb Hill drag runs, and is too flawed and simplistic to provide any sort of indicator of relative performance and ability of production cars in an off-road environment.

Plus I simply can’t see other off-road stalwarts such as Jeep, Land Rover and Toyota adapting to a form of measurement created by Nissan. Which of course immediately renders it pointless as a comparative reference.

Therefore any automotive journalist that quotes DCP is simply spewing out Nissan marketing blurb and seriously jeopardising their own credibility. They would also not really be providing consumers with any real, usable information, to help guide buyers’ next choice of purchase for those in the market for an off-roader.

For that, they simply must continue to consult those journalists who regularly and expertly drive cars off-road, such as Motoring Middle East’s Imthishan Giado. 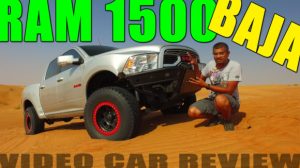 Few others can tell you more about off-road ability, user-friendliness, comfort and ruggedness as well as a highly-experienced motoring journalist.

Meanwhile I’m going back to try to figure out SPH, I still think I’m onto to something. Nissan certainly deserve some SPH, and I know the people at ESMA are waiting for my call!