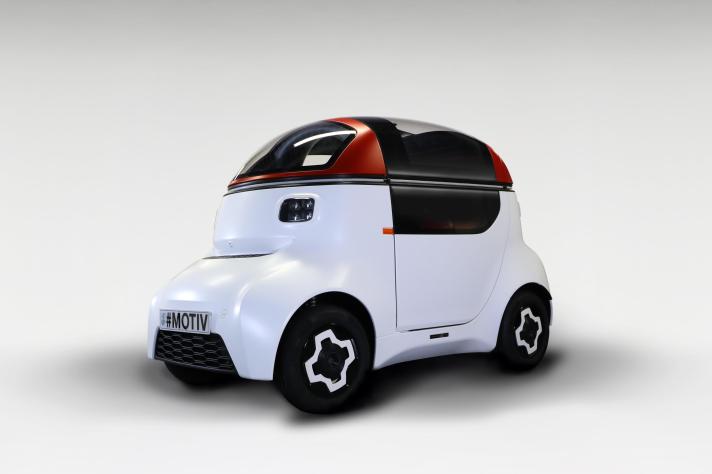 I’m a big Gordon Murray fan – the father of the McLaren F1 and the Light Car Company Rocket, but this latest concept from the engineering and design guru is testing my loyalty!

It’s the MOTIV autonomous vehicle concept created by Gordon Murray Design (GMD) in collaboration with Delta Motorsport and itMoves, using GMD patented iStream Superlight technology and is on show at MOVE 2020 this week at the London ExCel.

Let’s unpackage all of that. Part-funded by the UK government’s IDP14 programme, the idea is to create a cost-effective, ultra-lightweight quadricycle vehicle platform that is designed to meet full passenger-car crash safety requirements.

The single-seat ‘pod’ featuring a gull-wing door, is of course fully electric and is only 2.5m in length with a width of 1.3m and a height of 1.6m. However the platform can be adapted to seat more passengers, allow for wheelchair use or be used as a goods delivery van.

To provide autonomous drive, the team behind MOTIV is looking to tie up with autonomous technology providers. GMD plans to start its final real-world development phase soon with production expected within the new two-five years.

MOTIV is powered by a 20kW electric motor, and will be equipped with a 17.3kWh liquid-cooled battery pack providing a potential range of up to 100km. It will operate at speeds of up to 40mph (65kph) and is equipped with CCS charging capability to recharge from 20% to 80% battery in just 40 minutes.

So what has Professor Gordon Murray CBE got to say for himself: “MOTIV has the potential to transform future mobility. The best way to make any vehicle commercially viable and cost-effective, while delivering first-class efficiency, is to make it as light as it can be while retaining the highest levels of safety.”

In fact it reminds me of the pods I envisioned in my sci-fi short story about a future in which cars are banned – read that here.