Don’t be fooled by its diminutive size, this is one feisty little hot hatch

Remember Rhino the hamster-in-a-ball who is a fan of, and then befriends, Bolt the supposed superdog in the 2008 Disney movie? Rhino is tiny and tubby, but a powerhouse of passion, puissance and pluck; naive about the world, unshakeable in self-belief, and unconcerned about any notion of conventionality. 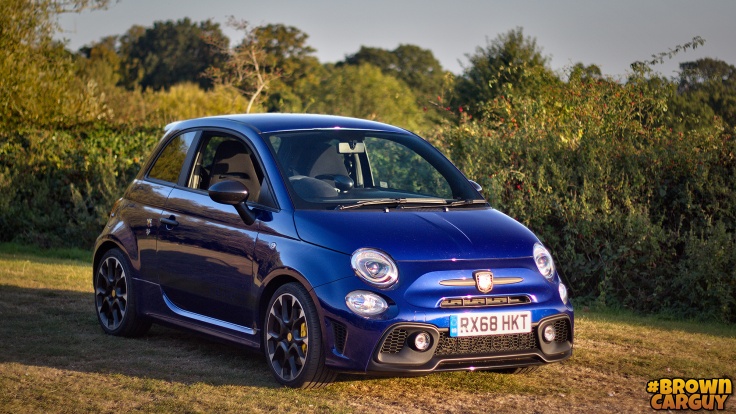 That’s who this crazed and not-so-cuddly-and-cute, Fiat Abarth 595 Competizione, reminds me of.

Amusing to behold most of the time, but most compelling when it’s called to action, doing what it vehemently believes it was born to do: scurrying around corners, ripping up roads and revelling in its own raucousness.

So what is a 595 Competizione and where does it fit in the Fiat 500 line-up? Well first of all, whilst it’s unmistakably a variant of the adorable little reimagined 500 that’s been winning over fans since 2007, Fiat would like you to recognise that the car you see here is an Abarth. 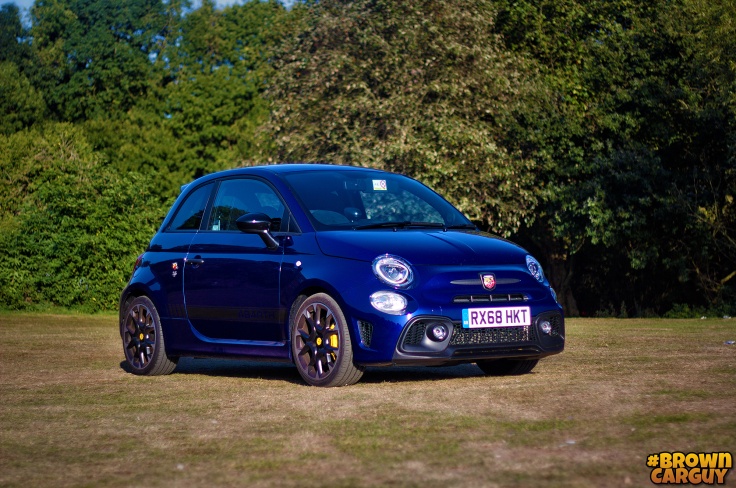 And Abarths are different. Drawing on the heritage of a racing car brand dating back to 1949 and long associated with, and now a subsidiary of, Fiat, these are not your everyday commuter cars. These are infused with the irrepressibly winning spirits of champions such as Tazio Nuvolari – once dubbed by Ferdinand Porsche as “the greatest driver of the past, the present, and the future”.

There are several versions of the Abarth 595, all wearing formidable pumped up body kits with gaping chins, rear diffusers, cap-on-backwards roof spoilers and a more hunkered down and planted stance. 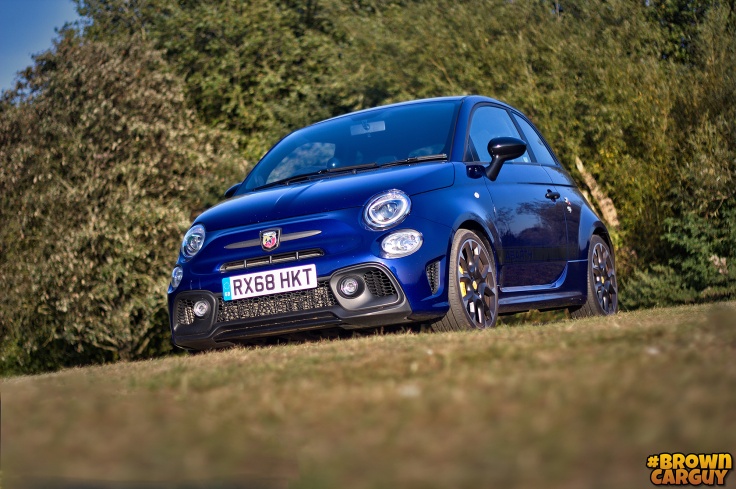 The base model offers 145bhp from the 1.4-litre four-cylinder turbo engine. Then you have the Pista and Turismo with 165bhp. Finally the most potent editions are the esseesse (yep that’s how it’s spelt with a lower case first e – and if you ask me to pronounce it, my tongue might fall out!), plus the car we’re reviewing here, the Competizione with 180bhp. A 696 70th Anniversary edition also comes with this level of power.

Top speed is 140mph and the 0-60mph acceleration time is 6.7 seconds. Combined fuel consumption is 36.7mpg and CO2 Emissions are 155g/km. And of course it drives the front wheels through a five-speed manual box.

The boot space is actually pretty usable with split folding seats adding to the versatility. Less useful are the rear seats, unless you put small occupants in them, and then have small occupants in the front too. Talking of the front, whilst I don’t recall having too much of an issue the last time I drove a regular 500, my long-legged 6ft 2in frame struggled a bit in this car.

The main culprit appears to be those bucket seats. They look wonderfully inviting, and are truly figure-hugging to the point that you might need to wave off that dessert every now and then. And they are certainly supportive. But they are too big for this car. Mounted high, they butt right up against the side, so that it’s almost impossible to reach the knob to adjust the seat back without opening the door.

The steering adjusts for rake, but not reach. I end up moving the seat further back to leave space for my lower limbs – the footrest on the left is not quite enough for large feet though the pedals on the right are well positioned for heel-and-toe downshifts. Then outstretch my arms to reach the wheel. As I’m sitting so high, I have to keep ducking down to peer beneath the front roofline to see traffic lights and notice road signs.

If that sounds uncomfortable, wait till you’re on the move. True to the impression given by the wheels and tyres packed tightly and ungivingly into those clingy wheelarches, the ride is… shall we say, firm? Around town you’ll feel every road imperfection and attacking B-roads at any kind of speed is like being stuck in a barrel and rolled downhill on ancient cobbled paving!

Conversely of course, attacking B-roads is what this Abarth lives for, and what it does best of all. The little give in its suspension, the solidity of its compact structure, the sharpness of its steering which is very well weighted, all mean that all your complaints and doubts are left behind in the dust as you, select Sport mode, seesaw the helm and chuck it this way and that, giggling as you go.

The 595 comes into its own, eagerly responding to your input, moving instinctually and channelling back a load of feedback particularly through the seat of your pants. 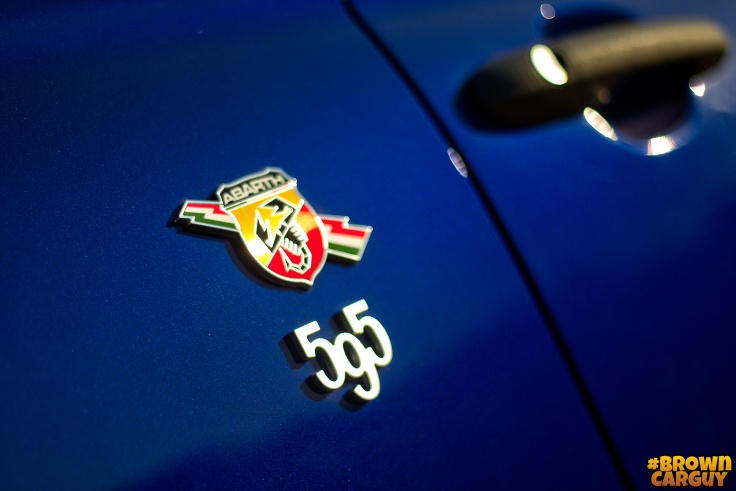 It’s not overwhelmed by its power, it deploys it with confidence. The tyres grip hard, it feels crazy but never lairy, and its composure is only shaken by its ability to react sharply, suddenly, swiftly to your instructions. The short throw gearbox is a little rubbery, but precise and joyful to use, and you’ll change more than you need to because it’s fun not necessary, as there is torque aplenty to pull hard in almost any gear. 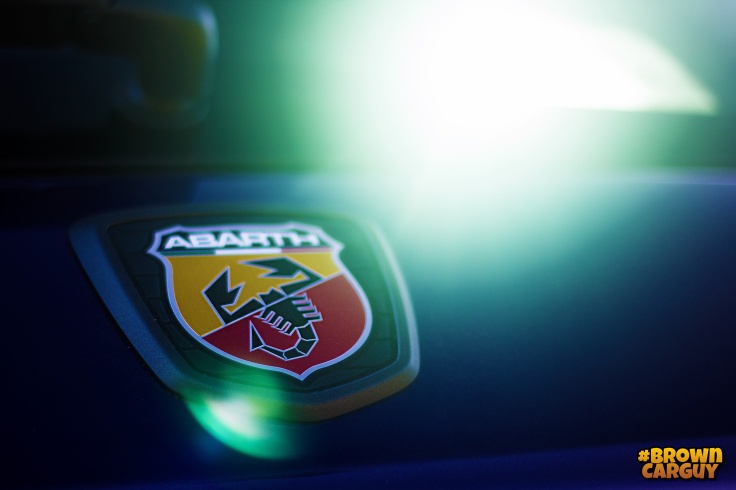 It’ll do motorways, it’ll do city driving, but it’s on windy roads where it is at its most sensational and exquisite fun. At this point you forget its foibles and give thanks that you opted for the full 180bhp version.

Trouble is, how often do you get to do this? I would love to say I’d have one, but if I’m not driving it hard, which would probably be 90% of the time, I’d be agonising over the compromises I’m making.

Ripping out the seats and replacing them with stock items might be an answer, but if most of your driving is done around town, why not just get the regular 500 Sport and save yourself well over £5k – with a manual gear change around town, it’ll be almost as much fun and way more comfortable. Having said that, if it’s a snarly little characterfully flawed Hamster with a heart of gold you’re after, the Competizione is for you! 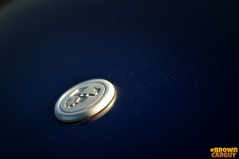 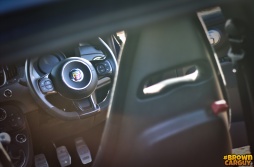 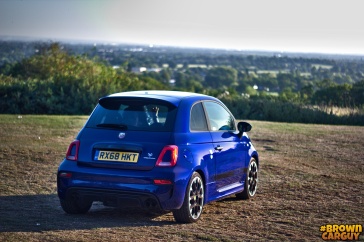 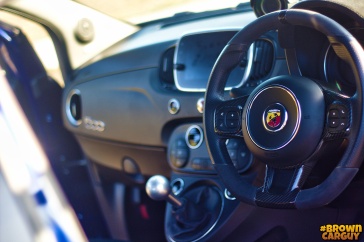 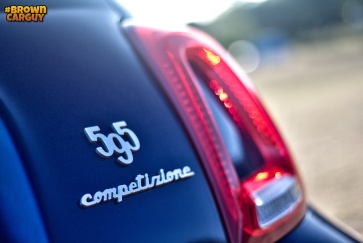 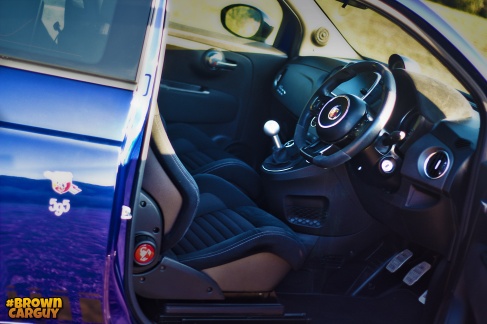 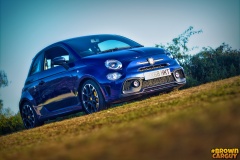 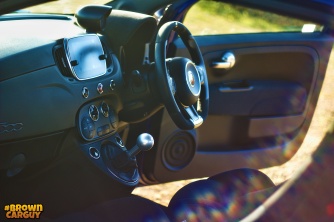 What’s going on here? 😲🤣 Find out at BrownCarGuy.com now
The Police should be our real-world super heroes. How did they become super villains instead?
‘Er… Houston, we’re being HAILED!’ 🖖🏽🤣
I was interviewed by Alec Drew on @dublincityfm - podcast now available, find it on BrownCarGuy.com