Alpine A110 versus rivals

Which mid-engined sportscar would you choose?

Watching last week’s The Grand Tour I was intrigued by James May’s revelation that he has bought an Alpine A110 despite claiming to be not too keen on the looks and suggesting that it was too expensive for what it was.

Well there’s obviously a bit of TV-style ‘bait and switch’ going on here aimed at grabbing the viewer’s attention. Clearly the Alpine is a very pretty car, and as for the price, well if he’s actually bought one, he can’t think it that absurd.

It did get me thinking though, how does it actually compare to other mid-engined rivals?

On paper, this stacks up very closely to the Alpine. Both have a retail price of around £47,000, although I think actual dealer prices are over £50k for Elise. Both have a 1.8-litre engine putting out around 250bhp, although the Alpine offers quite a lot more torque. The top speeds are about the same at 150mph, but 0-62mph acceleration is more than half a second quicker on the Elise at 3.9 versus 4.5 because it weighs just 931kg against the Alpine’s 1100kg. Plus the Elise is a manual, the Alpine a Dual Clutch Auto.

On the other hand the Elise doesn’t have power steering or air conditioning, no cruise control or sat nav, though you can take the roof off. And the Elise is also quite a bit smaller, and frankly not the easiest thing to get in and out of especially if you’re tall.

The Alfa is considerably more expensive at around £60,000, has a 1750cc engine putting out 240bhp and Alpine levels of torque through a dual clutch auto. It actually weighs about the same as an Elise at 900kg, but still only manages 0-62mph in 4.5 seconds with a slightly higher top speed at 160mph. There’s no power steering, cruise control or sat nav. And again it’s slightly smaller than the Alpine. 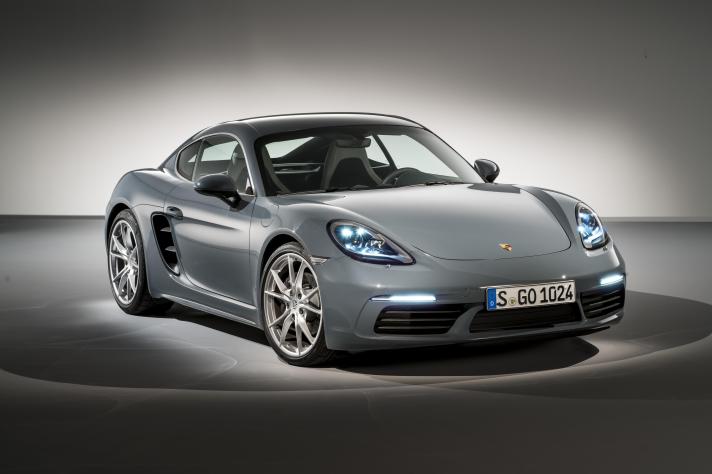 I have to choose the Cayman S for this comparison, even though the price jumps to £53k from the regular Cayman’s £44k, and the power output is 350bhp, way above the others in this lineup. However tipping the scales at over 1400kg means it needs that extra juice to keep up with its rivals here and return a 0-62mph time of 4.6seconds and then finally streak past them at 177mph. It’s a longer car than the Alpine, but slightly narrower.

I haven’t driven the Alpine, but I have tested the Porsche, the Alfa Romeo and an earlier less powerful version of the Elise. In terms of looks I’d go Alfa Romeo, Lotus, Alpine and Porsche, although frankly they are all exquisitely styled and desirable cars, so it’s purely a personal preference.

In terms of performance and driving, and leaving the Alpine out as I haven’t experienced it, I’d go Lotus, Alfa and Porsche. Having said that, the Porsche is by far the easiest car to daily drive and live with. It comes with all the creature comforts you’d expect of a modern car and won’t demand much compromise from the owner.

The Alfa is probably going to be the most difficult car to drive daily. It’s rather raw and uncompromising, you can’t see out the back of it at all, and it feels racecar stiff, because it is. The Lotus is somewhere in the middle but closer to the Alfa in terms of both the visceral driving experience it provides (even purer in the Elise due to the manual gearbox) and not being entirely the easiest car to get on with. I suspect the Alpine is closer to the Porsche though.

When it comes to value, the Alpine actually looks to be a pretty good offering. In fact considering it appears to be the cheapest car here, it’s combination of a potential daily usability and a genuinely engaging driving experience judging from May’s review, puts it out ahead. I’d put the Porsche second, the Lotus third and the costly but sexy 4C at the back for its exotic pricing.

So overall then the Alpine A110 actually does appear to be a great choice – and potentially could deliver some knock-out blows if this were a live group test. But since I can’t draw on personal experience with the Alpine, I’m going to put the Lotus Elise top because there’s just very little to touch it when it comes to the driving experience. On the other hand, if you have an extra £6k, and it’s a more usable, practical, higher quality and comfortable sportscar you’re after, it would have to be the 718 Cayman S.