The first in our very special five-part series celebrating 50 years of the Camaro on MotoringMiddleEast.com. 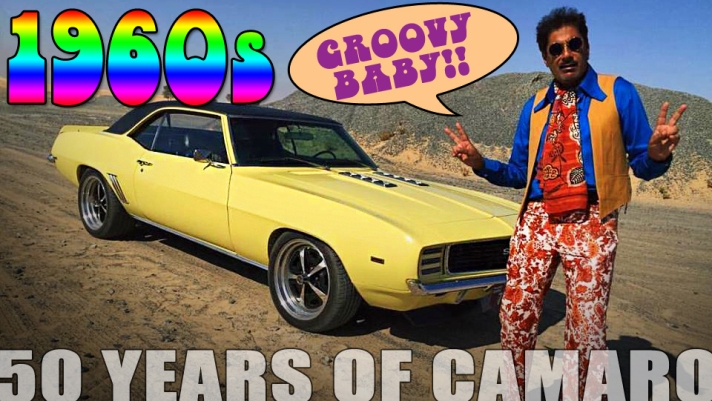 The first video features me driving a 1969 Camaro SS in Dubai and looking back at a truly revolutionary decade. Plus I dress up in paisley pants! Click more for the video now and some pictures of this gorgeous car.

We get transported back to the 1960s in our very special series on 50 Years of the Chevrolet Camaro. We look at the decade in which the Camaro was born and drive Khalid Bin Hadher’s gorgeous 1969 Camaro SS in Dubai.

Full text of this episode:

This is the 2017 Chevrolet Camaro SS. All-new from the ground-up, lighter, smaller, and packing one helluva punch: 6.2-litres, 455 horsepower, 455 lb ft of tire-shredding torque, 4.1 seconds to 100kph and a top speed of 266kph. This one’s very special; it’s the 50th anniversary edition which only comes in sexy Nightfall Gray metallic, mesh grille and nifty 50 badging all over the car.

This one’s awesome, but I want to take it back to where it all begin: 1967. Cue the psychedelic special effects, man!

Groovy baby! That’s what I call decked out!

The Sixties was revolutionary. It changed, well, everything really. It was the decade when young people got fed up of listening to The Man, man. So they took charge and they changed history, forever.

An amazing decade, but not one without turmoil. We had the Cuban missile crisis, Kennedy was killed, and half a million Americans went to fight in Vietnam, when all we really wanted, was to give peace a chance, man. Heavy.

But we also did amazing stuff, we put a man on the moon, James Bond hit our cinema screens, Rock n Roll took over, art went pop, fashion went hippy, and we got the polka dot bikini, the miniskirt, tie dye shirts and paisley pants. Outtasight man!

Can you imagine it? Back in 1967 you could pick up one of these for just $2466?! Try to picture it. Everyone drove big, boring upright saloons in Squaresville. Then you rocked up in this thing, with its sexy cokebottle curves, big throbbing bonnet and mean engine note.

When you arrived at the drag strip in this baby, you knew it, and everyone else knew it too. You’d won even before the lights had gone green!

But if some flake tried to race you for pinks, he’d totally wipe out man.

This car, belonging to UAE collector Khalid Bin Hadher, is actually a 1969 model, and it is gorgeous!

I reckon the 69 was the best looking of the three years of the first gen. It was subtly restyled with sharper creases and bulging bodywork giving it a lower, wider and more aggressive look.

This one’s not entirely original of course, riding on custom 18-inch wheels and Ridetech coilover suspension. It’s running a 396 and a TH400 3-speed Auto with new headers and mufflers.

The interior has been completely redone and it has a Digital Dakota instrument cluster.

To drive, well there’s just so much drama here. You can feel, hear and smell everything. It’s tactile, it’s mechanical, it’s… REAL man.

It’s surprisingly easy to drive. Potent too. Blip the throttle and you’ll find out what the song Twist and Shout was really about.

Yep, with your favourite gal riding shotgun and the Fab Four playing on the Music Machine, you were sure to score!

Plus it’s so spacious and airy, feels like there’s tons of room in here, and these thin pillars make it perfect to look out of. And, more importantly, be seen in.

You see in the Sixties, being cool was everything. Fortunately, sitting here in the driver’s seat of the Camaro, you were automatically more hip than everyone else around you!

Gosh the 60s were amazing weren’t they? What a fab period in human and automotive history?

But the party couldn’t last forever, man. The 70s were coming.