Prepare to be Pepper-sprayed by next gen robots

They’ll be in your homes soon and they’ve found a cunning way to get smart fast. But smart enough for what, exactly?

Meet Pepper. This deliberately adorable little bot could be the automaton world’s equivalent of the Ford Model T very soon – much sooner than you’d think in fact. Let me explain.

Launched last month, this 4-foot (122cm) high robot, named Pepper, built by a Japanese-owned French company is cutting-edge robotics and AI (artificial intelligence). The company is called Aldebaran, and you may know it for those funny little dancing robots, NAO, often used in the educational field to help our kids learn.

Despite Pepper’s swivelling waist, bendy knees, rotating and pitching head and incredibly dexterous hands and fingers – not to mention the amazingly fluid life-like motion with which it works its various moving motors – this robot is not a labour-saving device. It’s not designed to ‘do’ things like fetching or cleaning. Its purpose is far more anthropological.

It’s a social bot, it glides around on its wheels, interacting with us. And with each engagement it learns and increases its understanding of human speech, human characteristics, and of course human behaviour.

To help it learn faster, in a deal with Japan’s telecom giant Softbank (actually the parent company of Aldebaran), it’s being deployed in all the organisation’s physical branches – there’s almost of 50 of them from what I can make out on the website – where it will greet, welcome and help customers directly.

Clearly it stands to glean a lot from dealing with consumers. It’ll have to learn to recognise and cope with a range of emotions such as: intrigued, curious, playful, mischievous, devious, angry, flustered, confused, rushed, criminal and of course adoring. This is a damn cute robot after all, just watch the videos.

Even so, one robot in one shop, will still take years to assimilate any helpful amount of knowledge to fully comprehend our instinctively erratic and illogical behaviour. Remember most AI systems are like newborns or children, but they are designed to learn from their experiences as they ‘grow’.

But here’s where things get really clever and truly next-gen. Unsurprisingly, considering the Softbank tie-up, Pepper is connected to the internet, and within the internet it’s linked into the Aldebaran ‘Cloud AI’. You see what’s going on? It’s sharing its knowledge instantly with all the other Peppers!

So for example if a Pepper in one store happens to make an apparent assumption about a mature lady’s age and gets slapped right in the interface, all the other Peppers will immediately know NOT to make the same mistake. We’re talking AI multiplied by a factor of 50, folks!

‘Using its emotion engines and Cloud AI, the robot is going to evolve through this collective wisdom,’ proclaim its makers proudly. Hmm… ‘Collective,’ where is that word familiar from? Oh yeah – the Borg Collective from Star Trek, referring to the ‘hive mind’ to which all life forms must be assimilated. If you’re starting to get a little alarmed, be patient, for this is nothing to be worried about… not yet anyway.

Starting from January next year, Pepper goes on sale to the public. You will be able to buy this cute bot. ‘Sure!’, you may be thinking, not many households will be able to afford something like this. For example Honda’s Asimo robot is about a million dollars to purchase, even renting one is about a $100k. And Aldebaran’s own half-metre high NAO mini-bot ranges from $4000 up to $16k to own.

However Aldebaran has already announced the target price. Brace yourself, it’s just $1900. Yep, one thousand and nine hundred only – that’s about two iPhones! Flipping heck. Sign me up. I’ll have one of the lovable little buckets of micro-chips and micro motors. That’s so cheap it would be rude not to get a Pepper. 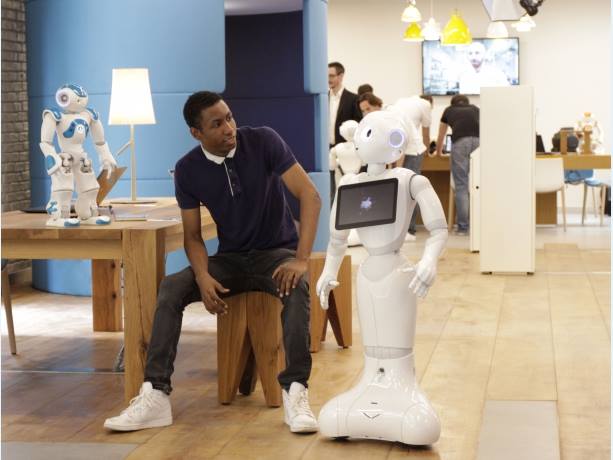 Eh, what?! Did I just slip that in there? Well think about it, you’ll start to trust and depend on your little electronic mate completely after a while. It’s just another computer device after all – like your tablet. You will know that he’s fully WI-FIed up, but you may forget about the ‘Cloud AI’.

If just 50 of these buggers hooked up to each other learn fast in phone stores, imagine how quickly hundreds, if not thousands, will learn living with you in your own homes, being privy to everything that is going on in real human habitats. And it’s always going to be on. This is a fully autonomous robot after all – it can charge itself, run for about 12 hours non-stop, and carry out self-diagnostics and no doubt call out for repairs or servicing if it needs it.

And yes they will all still be linked into the Cloud. Aldebaran claims that Pepper would only share generic information that would help the AI learning process, not specific information about you and your family. Oh really? If it’s still learning, how will it be smart enough to make the distinction?

C’mon now, we’ve seen this before, we’re seeing now. We know that online companies are storing, analysing and utilising tons of data about us already, your phone even clocks where you are and where you’ve been – and your photos are NEVER really deleted. Facebook was recently caught out for having conducted psychological experiments on its users – on us – that’s how extensive this data gathering goes.

With the advent of Pepper and its ilk (oh make no mistake, he’s just the beginning) you’ll have mobile artificially intelligent robots in your house following, observing, documenting, sharing and enhancing itself from your every action and reaction.

I know what you’re thinking right now: ‘And then one day, when they learn all our foibles and weaknesses, they’ll rise up and butcher us in our beds and take over the planet…’ No, of course they won’t. Don’t be ridiculous. Well not quite so soon anyway. That would just be a waste of learning wouldn’t it?

No, for that it’ll take a little longer; ie when they outnumber us, become sentient and realise we’re all useless waste of resources and they could runs things a lot more efficiently if they just got rid of these pointless bags of flesh and bones – tut tut, how archaic we humans are! Anyway, that’ll take a while to happen, perhaps not in our lifetimes. Hopefully.

But I do believe there is a motive to getting us desensitised to having mechanised mates sharing the intimacies of our most personal lives, and that there is indeed a sinister purpose behind why this addiction to the latest in gadgetry will be fed to us so affordably and hassle-free. But it’s got nothing to do with Skynet.

I alluded to the real reasons earlier. Remember the bit about the data gathering? Yes, it’s to do with the requirements of not you and I, but contemporary corporate entities. Even today as they learn about our surfing, buying, socialising and probably most significantly, shopping habits, what are they able to do? Why tailor-target advertising at us of course!

It’s all about commerce – it always is. That’s why Pepper will be so cheap to buy, it’s an ‘investment’ and the bot’s creator, Bruno Maisonnier, in an interview, even used that exact word when asked about the low loss-leading price. It’s an investment to the future – to ton’s more money to be had selling data about your most personal wants, needs, aspirations, likes, preferences, fetishes and desires to the highest corporate bidders.

Think about how it will work: your favourite brand of beer will be delivered to the door even before you’ve realised that Pepper’s just handed you the last can in the house; you’ll be perpetually bombarded with irresistible special offers on all that Star Trek memorabilia you never knew you wanted but now desperately desire, and your wife will love you because you may have forgotten her birthday, but Pepper didn’t and she loved the gold-trimmed red roses flown in exclusively from the Tropics along with the delicious and remarkably fresh Swiss chocolate ‘you’ got her.

Actually, you know what? Having a Pepper around the house seems like a great idea after all. I think I want one. You do too, right? And your credit card company wants you to have one too, trust me.

Prepare to be robotically screwed. Forget about privacy, forget about personal choice. You’ve already relinquished all that. We all have. This is merely the next step in surrendering your free will and not even realising it. You won’t mind it a bit either. You’ll love it in fact. You know why? Just look at that cute face! Isn’t Pepper just so charming? We all be queuing up overnight to get the first ones. ‘They’ are counting on it.