Why the 1969 Camaro was the best Chevy ever

When Chevrolet scratched a cat and ate Mustangs 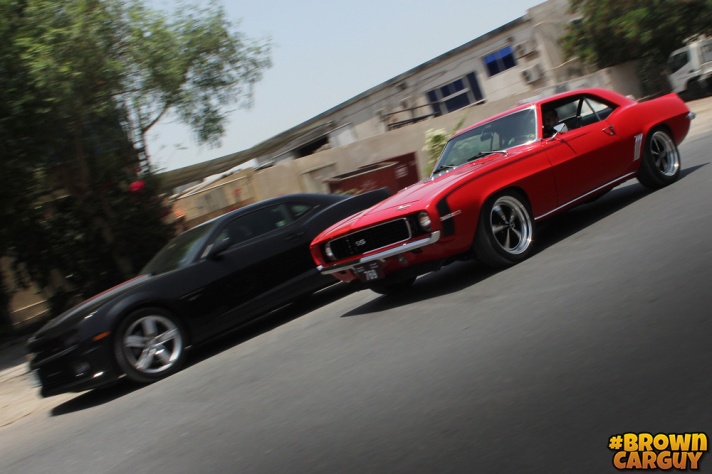 In Dubai, UAE, around 2012 I shot this beautiful 1969 Chevrolet Camaro belonging to Khalid Bin Hadher of Performance Garage for featuring to go on the Motoring Middle East website. He later resprayed it to yellow and soon I’ll post up another feature we did with it then – stay tuned.

The passion and enthusiasm engendered by the last of the line first generation Camaro is reflected in its iconic status as one of the defining proponents of the original muscle cars.

Chevrolet produced nearly 700,000 of the first generation Camaros (including 243,000 examples of the 1969 edition) and the intent of this car was made obvious from the very start. When rumours first started circulating in 1965, about a new sports car from Chevrolet, codename “Panther”, the media started speculating what it would be.

They didn’t have to ponder for long because on 21 June, 1966, around 200 automotive journalists received a telegram from General Motors asking them to “save noon of June 28 for an important SEPAW meeting. Hope you can be on hand to help scratch a cat…” The next day SEPAW was revealed to stand for Society for the Eradication of Panthers from the Automotive World – and the media was told that this would be the first and last meeting of this organisation.

A week later at that press conference the “Panther” was duly killed off and the “Camaro” was born. Chevrolet General Manager, Pete Estes, said the new name suggested “the comradeship of good friends as a personal car should be to its owner”.

However when journos asked Chevrolet top brass what the Camaro was (presumably enquiring what sort of car it was intended to be) the response was “a small, vicious animal that eats Mustangs”. Meanwhile Ford retorted that in old Spanish “Camaro” meant “a small, shrimp-like creature”! Touché!

Ford’s original Pony car had been a runaway success selling 100,000 units in just its first six months, and quickly became America’s best selling sports car. The Camaro was the Bowtie-wearing response. A response that was so good straight out of the box, that it remains an inspiration to this day. 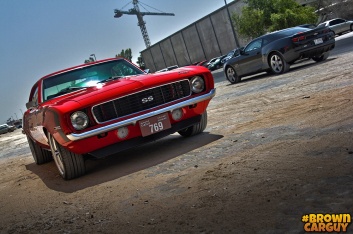 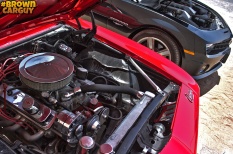 The Camaro first went on sale 29 September 1966 and ran for four generations before production ended in 2002 (the reboot happened in 2010). Built on a new F-body platform, the original car was a unibody structure aft of the windshield and at the front had a separate steel rail subframe. The independent front suspension was made up of double A-arms and at the back was a solid rear axle with semi-elliptical leaf springs. It had drum brakes and unassisted steering with prices starting from just $2,466.

There were a couple of straight-six engines, even back then, but if you’re not interested in the girlie engines then let’s get straight to the muscle car meat: a 327 cubic inch (5.4-litre) small-block V8 producing 275bhp along with two versions of the 396 cubic inch (6.5-litre) big block V8 rated at 325bhp or 375bhp. They could be mated to three- or four-speed manual transmissions or two automatic boxes.

Available from launch in both coupe and convertible guises, two additional trim levels were also available – the Rally Sport or RS which had hidden headlights, revised tailights and ‘deluxe’ interior trim, along with the Super Sport (more popularly known as the SS) which came with a domed hood featuring simulated vents along with ‘bumble bee’ strips encircling the nose and the SS badges, it also received a 350 (5.7-litre) lump up front. Amazingly, you could even have both trim packs together to form the RS/SS!

In December 1966 a race-orientated Z28 version was introduced fitted with a 302 (4.9-litre) putting out 290bhp and decked out with a firmer suspension.

In 1968 a fresh-air-inlet system meant the side vent windows were deleted the nose got the accentuated point that is now such a signature feature of the modern day Camaro. Shock absorber mountings were staggered to resolve wheel hop – so annoying when you’re trying to do burnouts! – and sportier models got multi-leaf rear springs.

And so we come to the best of breed: the 1969 edition of the first generation Camaro. It might look very similar but actually had all new sharply-creased body-work with a more pronounced V-grille and overall a lower, wider and more menacing stance.

The RS now had special black painted grille with hidden headlights, and simulated rear fender louvers (see, they’re not just fake on newer versions, they always were!). Meanwhile the Z28 still came with a 302 and a four-speed box now with a Hurst shifter.

Seems like a lot of work for just one production year though, but the 1969 model year was extended to November and whilst some regard later cars as 1970 MY examples, they were all assigned 1969 VIN codes. This was also the best selling year of production with nearly 10,000 more cars produced than the previous year.

And then there were the 427s – which officially didn’t happen, sort of… GM did not sanction the fitting of engines larger than 400 cubic inches (6.6-litre) but with one of the dealers already installing them, Chevrolet had to follow a ‘special order’ route to make the 427 (7.0-litre) L72 big block, producing 425bhp, available. This also sired the ZL-1 featuring an all-aluminium 427 tuned for drag racing. Just 69 of these were made with the hand-assembled engine alone costing over $4,000 though it did produce upto 500bhp.

Compared to a modern Camaro, the 69 version might have less of the pace, but you get more of the grace. There’s just so much more drama and feel to the older car, it smells right, it feels tactile, mechanical and real, there appears to be more room to lounge within, it’s easier to see out of and conversely, be seen in (important right?).

And of course it sounds so much better, even when it’s coughing and spluttering on start up. Once it settles down it has a deep grumble and metallic rasp that modern mufflers manager to mute. Most importantly though it just has great road presence, and simply looks cooler.

So how much do you pay for this coolness? Well 1966-69 Camaros can range in price for anything up to $90,000 depending on the quality of the restoration or updates and customisation, as well as of course spec. You’re certainly looking at spending over $50,000 for a really immaculate example. On the other hand you can pick up semi-decent usable examples which you could daily drive and do a bit of work on for as little as $25,000.