A Chinese car we actually wouldn’t mind owning? What’s the world coming too?

Family and comfort-orientated SUV that’s about Honda CR-V-sized, but starts at nearly AED30k less and offers premium levels of kit and comfort. Emgrand is the premium brand-within-a-brand at Geely.

It’s all-new for this year and in its second generation – no crash test results, but the first gen car scored 5-Stars on the Chinese NCAP crash tests, which is based on the Euro NCAP.

It’s worth noting however that Geely now owns Volvo, and there’s no doubt that in return for the massive investment in the legendary Swedish car company – which is now putting out a raft of fantastic new models – there’s a lot input going back to Geely in terms of quality, durability and safety (something that Volvo is renowned for).

But more on that in a bit.

It comes as either a front wheel drive or all-wheel drive – a system bought in from Borg Warner, and is fitted with – for our market – a 2.4-litre four-cylinder unit putting out 155bhp and 166lb ft of torque (though China gets a 1.8 Turbo). It’s mated to a 6-speed automatic, and has Eco, Normal and Sports modes.

With the floating roof and angular styling, there’s more than a hint of Range Rover in its external looks (although it mimics the Porsche Cayenne on the inside). But X7 is actually inspired by a Cheetah in motion – well that’s what it says in the brochure. And by the way, before you completely dismiss Geely’s design philosophy, know what? Volvo designer Peter Horbury is also the Executive Vice President of Design for Emgrand! 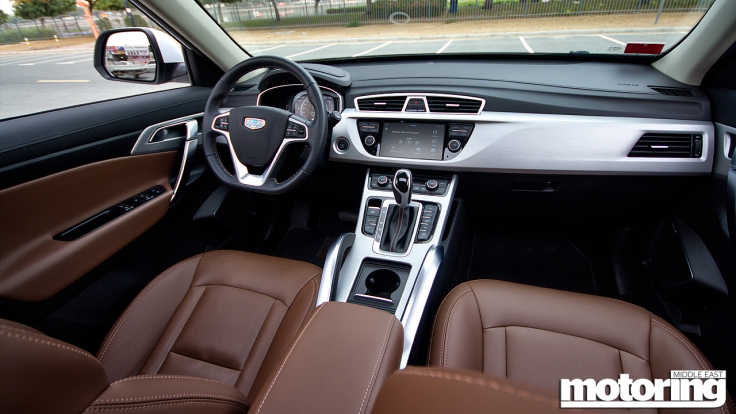 How much is it?

They’re all well specced too. Even the base car comes with leather upholstery and 17-inch alloy wheels plus 4 airbags, ABS, traction control and ESP – in fact ESP 9.1 from Bosch.

Or for exactly the same money you could have the higher spec Elegance model, but you’ll lose the AWD.

But if you really can’t do without the AWD ability, then you want the range-topper as featured here. For this you’ll hand over just AED79,995 ($21,800). But you’ll also gain exquisite Nappa leather upholstery – that’s the classy soft stuff from luxury cars. You also get front LED headlamps and driver side lumbar support.

It had a large boot with a low loading lip and an under-floor compartment for the spare wheel and tools, but also with space for a couple of squashy bags. There’s a power supply and the rear seats are split folding for those visits to IKEA.

Getting into the rear behind a front seat set for myself and my tall lanky frame, had no issues at all. There’s very decent room, a useful air vent (though two would be better) and fold-down centre armrest finished in posh piano black and aluminium effect with a nicely damped lid for the cup holders. My only gripe – there should be a power supply and a couple of USB sockets here.

The front seating position was a little less comfortable for me, possibly because I’m the very opposite of the body structure of an average Chinese person? Anyway, getting enough space for my long legs made the steering wheel a bit of a stretch despite adjustability. I also felt like I was a little perched on the chair, rather than sitting in it. Do take it for a test drive before you buy to make sure you’re comfortable behind the wheel.

As for the controls, they’re all quite logical and well placed, apart from the fussy arrangement for using the steering wheel remotes – which you’d get used to. A small detail that impressed me was the tactile response and smooth movement of the buttons on the centre console. None of the cheap uneven stickiness that you’d get even in Korean cars about 10-years ago. 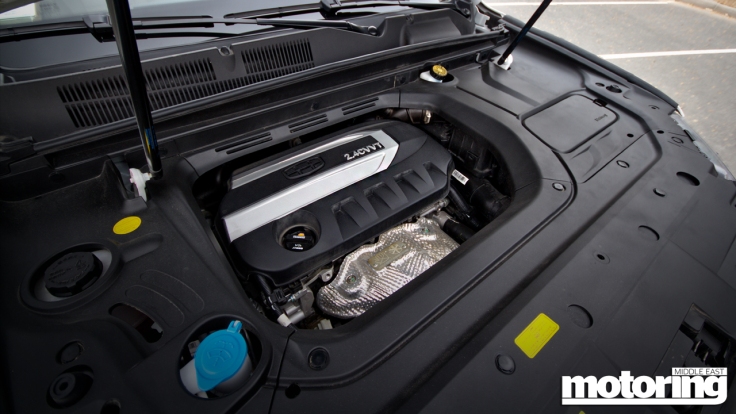 The large matte-finished screen is very Porsche-like too, but does suffer from glare and is sometimes difficult to read. The interface is fairly intuitive though.

There’s more of aluminium-look trim on the dashboard and the surface top is all soft-touch – another nice up-market touch.

Let’s get the engine out of the way first, it feels archaic and lumbering. You have to plan carefully when exciting side roads and entering roundabouts, and there’s not much mid-range either so think about those overtaking manoeuvres.

Having said that, once it’s up to momentum it motors along very well and it won’t have any issues keeping up with traffic around town and on the motorway. And the engine is not gruff and overly intrusive.

Which brings us to refinement. Watch the video above and you see how genuinely surprised I am when I close the door and quietness descends on the cabin – so sound insulation is good.

Add into the mix a remarkably good ride devoid of float and wallow with good bump absorption and admirably damped road noise.

Then take in the further surprise that it will entertain a corner without tyre-squealing and lolloping about, and the understeer is astonishingly well contained enough to be a non-issue. 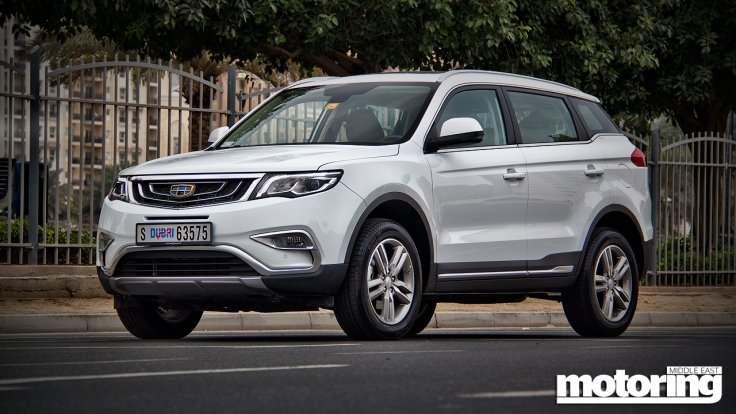 So NVH (Noise, Vibration and Harshness) is well contained, the ride is good and the handling entirely sufficient – looks like all that work by MIRA in the UK tuning all these aspects, has really paid off.

If it’s space, comfort, practicality, lots of toys and luxurious trim, with reasonable refinement and a good ride you’re after for very affordable money – and performance is not a concern for you – then head down to Geely and check this out.

So that’s a thumbs up if ever there was one.

But wait, there’s something else. When you get into a Chinese car – like Korean cars before (but not now) – you’d immediately adjust your expectations a little. You expect build quality to be a little lax, trim to be a little scuffy, and an inherent cheapness to be apparent. But you’d lock onto its good intentions and great value and be willing to give it a bit of a pass.

However, you don’t have to make those compromises with the X7. It feels like a solid and mature proposition from the get-go. You don’t ever feel short-changed or cheated, in fact you’d find yourself constantly surprise at what a nice car you got for the meagre outlay.

So there you go – top marks to a Chinese brand much to my own surprise, not just for trying hard, but actually hitting a home run. Somebody pinch me, this must be a dream. 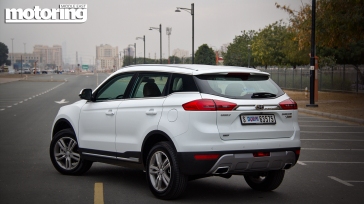 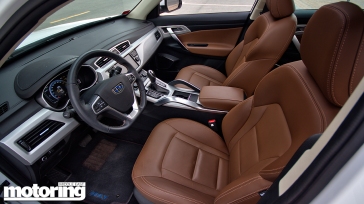 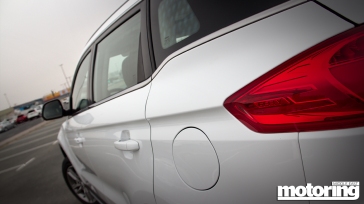