This is new Star Trek – but it’s back to doing what it does best: Boldly Going!

I’ve got to admit, as a huge life-long Star Trek fan, I went into the cinema with a great deal of trepidation to see Star Trek Beyond.

As much as I wanted to like the last movie with the spurious Khan, the reality was that it was frankly crap. It had also completely blown the Star Trek universe apart, because Federation citizens would commits acts of terrorism, you could simply use the transporter to get across the galaxy thereby negating the need for Starships, and death itself had been cured.

Let’s just pretend that one never happened. And instead delight in the fact that they brought in Fast and Furious director Justin Lin – the Enterprise has never looked so beautiful, the action has never been so breathless – and self-confessed Trekkie, Simon Pegg (who plays Scotty in these films) to write it. Thankfully JJ Abrams (who has admitted he’s more of a Star Wars fan) has been relegated to producer status.

It’s fascinating that Pegg – a brilliant writer when it comes to comedy – was himself apparently very nervous about penning an instalment of this hallowed sci-fi franchise. But the very fact that he took it seriously means that well… stand up and take a bow Mr Pegg, on the 50th anniversary of Star Trek you have done it proud!

Now this is definitely new-age big-blockbuster, high-energy, extremely fast-paced Star Trek – so still very different to the classic plodding series and the considered and contemplative 80s Next Generation series. 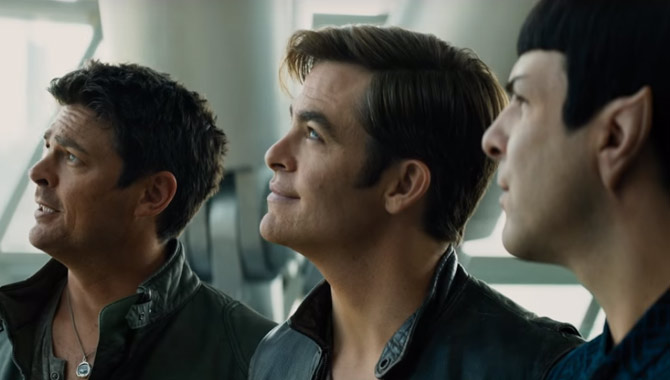 But it works, because it brings it back to what Star Trek has always been about – a gallant and heroic crew, lead by a superhero who doesn’t believe in a no-win scenario always trying to do what’s right even in the face of overwhelming odds.

The actors are much more at ease with their characters now, the Captain has grown up and become Kirk, Bones is still one of the best things in it and is as wonderfully aghast at everything as we the audience, Spock even did the eyebrow thing, and the universe itself makes sense as something that Roddenberry would have conceived had he had stunning CGI and Dubai’s skyline available to him!

It’s exquisitely filmed, the script is tight, the balance of humour just right, the ‘wow’ moments precisely placed and the pace frenetic but fitting.

I mourned the Enterprise but I loved the ride, and I think three movies in they’ve finally got it right. If I were in charge of things I would get Pegg and Lin working on the next instalment immediately.

This is a must-watch for sci-fi fans as well as Trekkers everywhere!

One thought on “Star Trek Beyond Review”