The future that Back to the Future did NOT predict

We didn’t get the hover board, the flying cars, the self-drying clothes or the auto-tie shoe laces, but we do have a lot today that was never predicted by the second instalment of the brilliant 1980s trilogy.

First and foremost, the Michael J Fox and DeLorean starring movies were utterly marvellous film-making and story-telling at its best. The technology and predictions that were shown were often there as part of the plot (for example the hover board ultimately saves Doc Brown!

Back to the Future was not meant to accurately predict the future, nonetheless it did contribute towards forming visions of what 2015 might be like, at least for those of us that watched it the first time around. Sadly the flying and hovering was way off, as was the Mr Fusion portable power reactor.

So did technology fail, did scientist let us down? Not really. A couple of things in BF II do ring true straightaway, the world hadn’t changed that much beyond recognition, as sci-fi often suggests. And 80s retro had its own themed shop – in fact nostalgia is selling today more than ever, and Generation X will happily buy anything that reminds them of that hopeful and glitzy period.

And what the movie rather spectacularly missed (particularly with its emphasis on fax machines and phone booths) was the advent and domination of portable smart technology and the information era brought to you by the wonders of the world wide web! 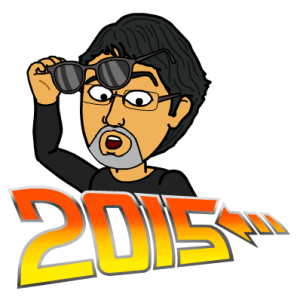 Powerful computing, genetic engineering and robotics as well as artificial intelligence is technology’s true gift to us in the 21st Century, more so than the spectacular sky-reaching visions of movie-makers.

Smart phones and the internet are probably the two things that have had the most far-reaching and extensive impact directly on our everyday lives to such an intense and deep effect that we find it impossible now to imagine a world without them.

In a way then, the movie did get the future right. It depicted a 2015 that was recognisable to us in the 1980s, but was still full of wonderment and astonishing achievements that would change our future lives and our future selves.

And remember, the future is not here yet. The future is tomorrow. So there’s still hope yet for hover boards and flying cars!